A recent tradition of Philly Beer Week is for one local brewer to travel to Belgium to collaborate with a brewery there. This Belgo-Philly connection is mostly due to Tom Peters of the most excellent Monks Café bar. He generally hooks Philly up with great Belgian beers all year round and has the connections to line up special collaborations every year. Last year, we had an Iron Hill and Dupont saison, and the year before that, Sly Fox worked with De Proef to make a funky saison. This year, Chris Wilson of Weyerbacher was chosen to collaborate with Brasserie de la Senne, and they took the enterprise in a decidedly different direction.

They call this sucker a Belgo-American Dubbel. It’s got the trappings of the dubbel style (spicy Belgian yeast, dark sugars) mixed with a more American hop bill (notably including Calypso, which is not common, but which should impart fruity citrus hop notes). The label is actually pretty funny, a mashup of the William Penn statue that sits atop City Hall and the infamous Belgian landmark Manneken Pis (which, yes, is a statue of a peeing child). Yeah, so it’s an interesting combo, one I don’t think I’ve had before, so let’s see how it turned out: 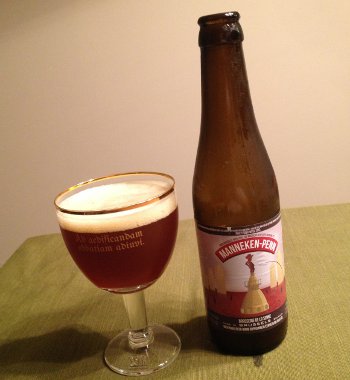 Weyerbacher and Brasserie de la Senne Manneken-Penn – Pours a deep light brown color with a finger of fluffy head and good retention. Smells feature that typical Belgian yeast profile, spicy and fruity, some brown sugar, but also something else lurking in the background. Maybe hops? Yes, American hops, a little citrus and pine. And whoa, those hops take a front seat in the taste, lots of citrus and pine with the Belgian yeast characteristics still making themselves known before the bitter hop finish. Yep, this is like a dubbel/IPA hybrid, a combo I don’t think I’ve ever experienced… and it works well enough. Mouthfeel is well carbonated, medium bodied, and a little dry bitterness in the finish. Overall, this is quite an interesting, novel beer. Doesn’t quite blow my socks off, but it’s pretty damn good. B+

Interesting stuff, and I’m already looking forward to next year’s collaboration. I may also have to check out some of Brasserie de la Senne’s other wares in the meantime.