Finally ticking the last of five beers I bought at the Dock Street bottle release way back when. A flanders red aged for 2.5 years in old Cabernet Sauvignon barrels, then (unintentionally) further aged in the bottle for another year and a half or so. Color me interested: 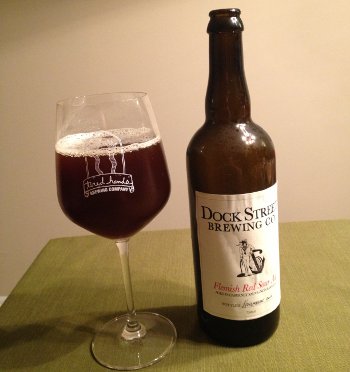 Dock Street Flemish Red Sour Ale – Pours a dark amber brown color with minimal, slow forming, big bubbled, white head. Smells of oak and cherries, with a very sharp twang that indicates sourness, quite nice. Taste is very sweet and extremely sour, with that sourness hitting almost immediately, lots of fruitiness, sour cherries, vinegar, jolly ranchers, and some oak making itself known in the middle to finish. Mouthfeel is a little low on carbonation, but nothing excessively low (like some of Dock Street’s other barrel aged brews). It works well enough at the start, but it feels a little flat towards the end of the bottle. Medium bodied, an acidic vinegary feel, very slight slickness. Overall, this is a good example of the style, but not quite world beater status. B+

It seems like every one of Dock Street’s barrel aged brews has just one minor flaw that holds in back from true greatness. They’ve all been pretty good as they are, but tended to be a little low on carbonation, or in this case, a little high on the acidity. Part of it could always be the age of the bottle, but then, they claimed the low carbonation was intentional, so there is that. I’ll probably continue to check out their annual barrel aged brew, and some of the staple beers are pretty great too. One of these days they’ll really knock one out of the park…