So this wound up being another infected beer that I’m going to dump on, not quite as bad as the Tot Taint, but still not very good. And yes, I suppose that’s ironic considering I just praised an intentionally infected beer, but those Cantillon folks know what their doing. These Santa Fe guys must have done a little too much meth and let their bourbon barrel barleywine get infected. I’m sure there’d probably be a way to salvage this beer (perhaps involving further barrel aging and additional wild beasty doses), but it seems that they left that task up to us, which leads to glorious nonsense like DDB’s solution to the problem:

Man, that looked super chunky and gross… but I’m not sure it would be that much worse than the infected beer itself. The worst part is that if it weren’t infected, I’d probably love this beer. As it is, I had a rough time getting through my first glass and didn’t even bother with the rest of the bottle. 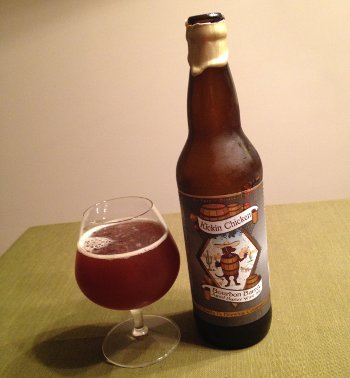 Santa Fe Kickin’ Chicken Bourbon Barrel Barley Wine – Pours a turgid, murky brown color with half a finger of light tan head. Smells of caramel, toffee, dark fruits, not a lot of that barrel in the nose, but nothing that screams infection either. Taste starts off with a rich caramel sweetness that gradually gives way to a slight vinegary sourness and wild tang which lasts through the finish. Yep, this is definitely infected. Mouthfeel is medium bodied, thin in the way some sours are thin, acidic, unpleasantly abrasive. The richness yields to the infection and the sourness lingers through the aftertaste. Overall, it’s not very good! D

This beer actually came to me via Texas in a trade I should really explain more about (will probably do so tomorrow), so it’s unlikely that I’ll see these Santa Fe folks again. That being said, I’d love to try an uninfected version of this beer, as it seemed to tick the right checkboxes.