So far, most of my beer trades (which I can count on one hand) have been with people I already “knew” in some way, mostly from interacting on each others blogs. But if you head over to Beer Advocate or Rate Beer and hit up their trading forums, you’ll see a veritable cornucopia of stranger-on-stranger trading. This is a realm I’ve not really gotten into too much, and it’s probably not something I’ll pursue heavily, but there is a variant of the typical 1 on 1 trade called a “BIF”.

BIF stands for Beer It Forward, and it’s kinda like a secret santa, but with beer and without the holidays. Basically, you sign up for a BIF, get assigned a target, then send them a box full of beer. There’s always a set of minimum requirements or a theme that you have to meet, and the general idea is that everyone ships (and probably receives) their boxes around the same time (there are several variants of this process – what I’ve described here is called a “shotgun BIF”). Everyone knows who they are sending their beer to, but no one knows who is sending them beer. There’s a thread where people drop hints and try to guess who their sender is, and eventually everyone posts their hauls their too.

My target was in Chicago and we’ve already talked about future trades so that I can get my grubby hands on more Three Floyds awesomeness. My sender was from Texas, so I got me a cache of Texas (and other local environs) beers. The highlights, to my mind, were a few Saint Arnold beers, and three Prairie sour farmhouse ales (my sender correctly deduced that I was a saison/sour fan), the first of which I opened this past weekend. Prairie seems to be making the rounds of late, and I get the impression that these sours aren’t distributed as far and wide as their regular stuff. This one is a sour farmhouse ale and a collaboration with Saint Somewhere. Check it: 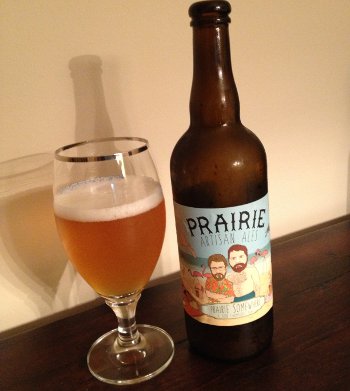 A decent first impression from Prairie, and I’ve got two more of their sours that will probably be popped open in the coming weeks. Expect some Texas locals to start showing up on the blog as well, including one tomorrow and probably some of that Saint Arnold stuff next week.