The last time I had Eclipse, I was wondering if it was really possible to pick out different makes of Bourbon by drinking the beer aged in said Bourbon’s barrels. Fifty Fifty Brewing’s Eclipse series is ideal for that sort of experiment, but I think my methodology is off – I’m drinking this three months after I drank my last one (which was aged in Elijah Craig 12 barrels). I suppose I could throw on some Journey and do a comparative tasting of 5 different variants… Total eclipse of the hangover. Just in time for summer!

Rittenhouse Rye was originally distilled just a hop and a skip away in Linfield, PA (It’s now made in Kentucky, along with Heaven Hill’s other brands), which is why I recognized the name. Rittenhouse Square and Rittenhouse Hotel are Philadelphia institutions, named after local Age of Enlightenment man David Rittenhouse, a noted astronomer and clockmaker who went on to become the first director of the United States Mint (a seemingly strange shift in priorities, but then, Isaac Newton had the same basic trajectory, though he was obviously more well regarded.) Anywho, the most common Rittenhouse Rye expression is a 100 proof whisky, which is slightly stronger than the Elijah Craig 12 (47% ABV). Too small to notice? Well, I had found this one to be more whisky forward than the EC 12. Is that a function of age (only three months?), or did these two different barrels produce genuinely different beers? I may have to risk the hangover to find out sometime. 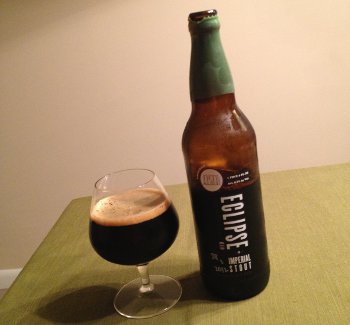 Imperial Eclipse Stout – Heaven Hill Rittenhouse Rye – Pours a dark brown, almost black color with a finger of light brown head that actually leaves a little lacing. Smells deeply of that barrel aged character, lots of whisky, oak, vanilla, a little bit of caramel, and the faintest whisper of roast. Taste is full of rich caramel, whisky, oak, and vanilla, with the roast again taking a back seat (definitely not as roasty as that Elijah Craig 12). Mouthfeel is full bodied (but not quite the monster that a lot of BA stouts can be), smooth, well carbonated, lots of richness. Overall, this is more whisky forward than the EC 12, but the balance that marks Eclipse is still in place and kicking. This is a superb beer. A

I have a couple bottles of Eclipse variants in my cellar, and one of my local beermongers still has some on the shelf too. You’ll definitely be seeing more of this stuff on the blog at some point.