I covered the philosophy behind Firestone Walker’s barrel program in wonky, exhaustive detail when I wrote about Firestone Walker’s last Anniversary Ale, but for the uninitiated, Firestone Walker is a brewery that likes to ferment and age beers in barrels and their Anniversary Ale represents an annual tradition whereupon they invite their neighboring winemakers to the brewery to get sloshed and devise a blend of several component beers (each of which was specifically made to be blended, though FW has taken to releasing the components on their own, to much fanfare).

The XV blend heavily favored Barley Wines, and most of the component beers were aged in bourbon and/or brandy barrels. The breakdown was 76% Barley Wine style beers, 19% Stout and 5% Imperial IPA. It had a nice deep, dark amber color to it – gorgeous, delicious beer. This most recent offering’s components skew a little darker:

Definitely more equitable distribution here: 53.6% Barley Wine style beers, 41.9% Stout, and 4.5% Black IPA. Even amongst the Barley Wines, the lighter colored Helldorado accounts for less. Plus, instead of Double Jack (a DIPA), we get Wookey Jack (a Black IPA – basically a hoppy stout). Also new this year is a brew aged in Tequila barrels, which is a nice twist. Alrighty then, enough nerding out on statistics, let’s get down to brass tacks: 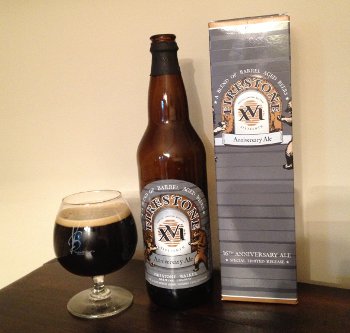 Firestone Walker XVI – Pours a very dark brown color, almost black, with a finger of tan head that leaves a little lacing as I drink. Smells of boozy bourbon, oak, vanilla, and caramel. Some char, not quite roast, is also present. A little fruitiness and dank, piney hops emerge as it warms too. Taste starts sweet with bourbon, oak, dark fruit and huge caramel notes (reminiscent of crème brulee) like a BA barleywine, with some piney, resinous hops emerging in the middle and a hint of chocolate and roast peeking in towards the boozy oak and vanilla finish. Super complex, evolves quite well as it warms. Mouthfeel is not quite as thick and chewy as expected, medium to full body, well carbonated, a hint of sweet, boozy stickiness, but still well balanced. Overall, this is fantastic beer. I’m not quite as breathless as I was when I tried XV, but this works incredibly well in its own right. A-

Superb stuff, like all of Firestone Walker’s barrel aged beers. I’ve managed to snag another one of these anniversary bottles (along with some Sucaba), and I’m keeping my eyes peeled for Parabola whenever it shows up in the area (hope I didn’t miss it, actually). Rumor has it that Velvet Merkin will be bottled later this year as well, which I’d really be curious to try… Firestone Walker is also upping their game, increasing their barrel capacity and even playing with wild yeasts and bacterias, etc… in their new barrel room. Will be very curious to see if next year’s anniversary blend incorporates sours…