Last week, I got an email from some guy named Dany. Oh, it’s the brewer from Fantôme, and he ran across my recent review of Fantôme Saison, a beer that has been inconsistent, but great (he said it’s not always perfect, but he doesn’t want to do the “same basic commercial work, like … too much belgian brews”). We exchanged a few emails, and Dany recommended that I try out Brise-BonBons, which he said “USA amateurs” seemed to enjoy because it’s more hoppy than your typical Belgian stuff. Fortunately, I just happened to get my hands on a bottle of this stuff, so I cracked one open this weekend, and yep, this one is competing for the very best Fantôme I’ve ever had. As the bottle sez:

With joy and a little bit of mischief, Fantôme brewer Dany Prignon dedicates this very bitter beer to all of the many varieties of brise-bonbons – literally, ball-breakers – in the world. Specifically, this beer is meant for wise-guys, braggarts, pains-in-the-ass, muck-rakers, troublemakers, know-it-alls, stuffed-shirts, blow-hards and bores, as well as nut-cracking, wind-bag, prattling-on, self-appointed experts on everything, and nose-in-the-air snobs, convinced they can do anything better than you. Dany intended to make a beer too bitter for a normal person to enjoy. The problem is, everyone loves it! Guess we’re all just a bunch of brise-bonbons sometimes…

So I guess it’s time to break some balls: 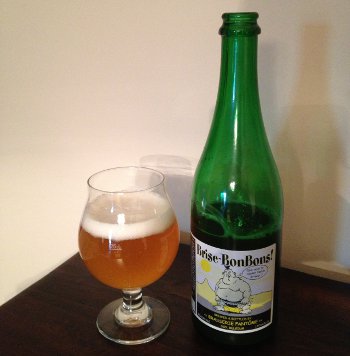 Fantôme Brise-BonBons! – Pours a cloudy yellow gold color with a couple fingers of fluffy white head. Smells deeply of funky Brettanomyces, lots of earthy aromas, a little yeasty spice, but also a sorta brightness to it. A kinda lemony bubblegum aspect, but, uh, better than that probably sounds. Perhaps even some hops up in the mix. Really nice nose, actually. Taste starts off sweet and spicy, like a Dupont-style saison, but then that funky Brett moves in, bring that earthiness and maybe some bright lemony tartness too. It finishes with a really well matched dry bitterness, presumably from the hops. Mouthfeel is perfectly carbonated (effervescent might be an overstatement, but it’s got a high carbonation), crisp on the palate, refreshing, and dry. Overall, this is right up there with my favorite Fantôme experiences, fantastic beer. A-

If I may name-drop Dany again, he also recommended I try some Magic Ghost, that saison brewed with green tea that looks like straight-up ecto-cooler. I just happen to have recently acquired a bottle of that stuff as well, so keep an eye out for a review in a few weeks.