I was mightily impressed by Williamsburg’s bourbon forward barrel aged porter, and this Coffeehouse Stout, while perhaps not as storied, was a nice change of pace considering that I’ve been hitting up big, burly Imperial Stouts and Barleywines a little too consistently lately.

As I’ve mentioned many times before, I’m not a big coffee drinker, but I’m starting to get a taste for the stuff when it’s included in beer. In this case, it’s a milk stout brewed with coffee, and as Rich commented, it really does kinda lend the impression of coffee with sugar and cream (I mean, it’s still clearly a beer, but this mixture of roasty beer, lactose, and coffee really seems to mix together well…) Thanks to Dave for hooking this one up for me… Check it: 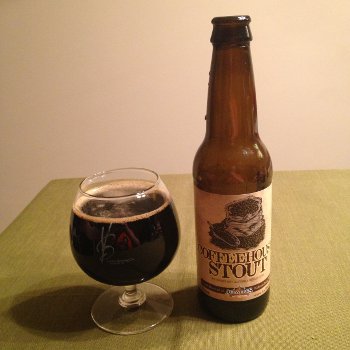 Williamsburg AleWerks Coffeehouse Stout – Pours a very dark brown color with half a finger of tan head. Smells of… yes, coffee. A little roast and a little sweetness too. Taste is full of roast, with coffee quickly showing up and doing its thing through to the finish. In fact, I feel like that coffee sorta softens the intensity of the roast, which is actually nice. There’s also a character I associate with milk stouts (ah, yes, this actually is a milk stout, so that makes sense). Not a lot of bitterness here, but it’s not cloying either – well balanced stuff. Mouthfeel is where this really shines – it’s very smooth, velvety, creamy, again with the balance here. Overall, this is a really good coffee stout. Not being a big coffee guy, I can appreciate it, but if you’re a coffee fan, you might think of this as being spectacular. Me, I’ll give it a B+.

I’m now keeping an eye out for Café Royale, which is a souped up and barrel aged version of the Coffeehouse Stout, which I think would actually really work well.