When I was putting together a trade with Jay from Beer Samizdat, I wanted to find an imperial red ale for him. He loves the style, but it’s not ubiquitous enough that every brewer makes one, so I was a little worried that I wouldn’t be able to procure a good one (at least, one that’s not already distributed to CA). There’s a pretty good local take on the style called Atomic Raygun, but bottles are scarce and I know for a fact that the one at my local bottle shop has been sitting on the shelf for a long time (talk about that not so fresh feeling). Fortunately, I totally stumbled upon this Clown Shoes collaboration with Three Heads Brewing, a 50/50 blend of Eagle Claw Fist and Loopy Oatmeal Red Ale. Serendipitous!

It was released in preparation for last year’s election, and the brewers encouraged a write-in vote for Three Heads founder and upstart presidential candidate Geoff Dale (he chose “beer” as his running mate). I was a little hesitant when I saw the bearded dude flashing the shocker on the label, but it sounded good, a bunch of strangers on the internet seemed to think it was decent, and looking at my other options, this was my best bet. Fortunately, Jay was quite happy with it, so mission accomplished. In fact, he liked it so much, I had to go out and get myself a bottle, just to see how awesome I am.

So, can this imperial red ale overcome our misunderstood friend, the elecoral college, what with the way most states implement a winner-takes-all, first-past-the-post system (the combination of which sorta encourages a two party system – what? Come on, work with me here…)? 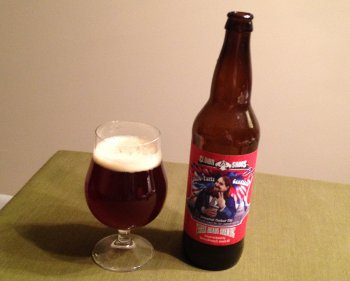 Clown Shoes & Three Heads Brewing Third Party Candidate – Pours a very pretty dark amber color, robey tones, so much clarity, a finger of fluffy off-white head and plenty of lacing. Smells of sugary crystal malts and piney, resinous hops. Taste is filled with sweet, rich caramel, balanced out by a very well matched resinous hop flavor. Good balance of sweetness and bitterness, with a hint of booze apparent. Mouthfeel is rich and almost creamy, very smooth, with a hint of booze, though nothing that would indicate 10% (i.e. booze is actually well hidden here). Overall, we have a classic imperial red here, extremely well balanced malt and hop character, right up there with the best I’ve had in the style. A-

I did not realize this was bottled so long ago, but given the way an imperial red relies on malts for a lot of its character, it all worked out well enough in the end. It’s currently listed as “Out of Rotation” on Clown Shoes’ website, so I’m not sure if they’ll ever bring it back… and come to think of it, so is Eagle Claw Fist… Jeeze, guiz, what’m I supposed to send Jay for our next trade? This is by far the best Clown Shoes beer I’ve had so far, so I’m actually looking forward to that imperial stout I have in the cellar now…