The notion of a white wale in the beer dorkosphere is a sorta moving target. When you’re a newb or even an intermediate beer nerd, stuff like KBS or just about anything remotely desirable that’s outisde your normal distribution chain can feel like a whale. Then you discover the swanky world of beer trading and realize that true .rar wales are a whole other level. Fortunately, I’m fine with regular ol’ shelf-wales or stuff like Black Tuesday, a limited (if you consider 3-5 thousand bottles limited – shit sold out in 10 minutes, though, so there is that), brewery-only release that is nevertheless available to those of us fortunate enough to find a mule willing to pick your beer up for you. Big ups to DDB for muling my bottles (and, apparently, lots of others).

So, what’s the big deal here? Well, this is a 19.2% ABV imperial stout aged in bourbon barrels for over a year, and the opinions of a bunch of strangers on the internet seems to indicate that it’s really fucking awesome. Indeed, this might very well be the strongest beer I’ve ever actually tried, and for crying out loud, it only comes in 750 ml bottles. It’s either something you need to share with a bunch of people, or something you greedily keep to yourself so that you achieve your goal of contracting diabetes. I opted for the latter option, clearing out my Saturday to slowly take this sucker down. I started drinking this bottle at 5, ended at 10. Now, “strong” does not always translate to “awesome”, but in this case, spiking the blood sugar levels was totally worth it, and it was a worthy finale to my Bruery fueled, wallet lightening winter: 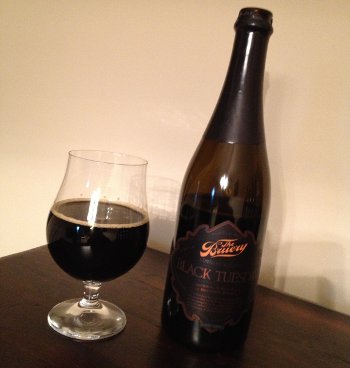 The Bruery Black Tuesday (2012) – Pours a deep, dark brown color, almost but not quite a black hole from which no light can escape, with a thin cap of light brown head. Smells incredible, tons of bourbon, oak, vanilla, caramel, chocolate, booze, and a very light touch on roast. Taste follows suit. Rich, chewy caramel, bourbon, oak, vanilla, chocolate, maybe even some coconut, a heaping helping of booze, finishing with that hint of roast. Amazingly complex, picking up new subtleties with each sip. Mouthfeel is full bodied, rich, thick, and chewy, with some definite alcohol heat on the backend, but nothing unpleasant at all. Even after a small sip, my mouth is coated, leaving the aftertaste to linger for a while. A sipping beer, for sure, but in the best possible way. I wish it was colder and that I could sit in front of a fireplace or some shit. It’s approachable, but astoundingly complex. It’s hard to call something this intense well balanced, but there’s no really dominant aspect either, and like I said, I keep discovering new bits with each sip. Overall, this beer is fill with a richness and complexity that few others can approach. Amazing, face-melting stuff. A

Potential A+ stuff here, though I have a semi-rule that I won’t hand one of those out unless I try something on at least two separate occasions. Fortunately, I have another bottle of this stuff in the cellar, so this is an actual possibility. Plus, I will most likely try for this again next year, perhaps even trying my hand at the next level variants like Chocolate Rain or Grey Monday. Or not. Maybe by that point I’ll be swimming in Blaeber and the actual walez like 2009 Black Tuesday. Time will tell (but, uh, I wouldn’t count on that).

3 thoughts on “The Bruery Black Tuesday”