Another Tired Hands bottle release today! Unfortunately, I was unable to acquire the rarer of the two bottles released (Guillemot Prunus, a dark saison fermented in a Jim Beam barrel atop 45 pounds of local tart cherries). According to Jean, they got less out of the barrel than expected, so the bottle count was a little lower than the estimated 150. And I only got there a little early (I was honestly surprised to see so many people, given how cold it was), so I had to settle for just getting an allocation of Guillemot Nebula, which, to be fair, sounds rather awesome. It’s a 50/50 blend of Jim Beam and Chaddsford red wine barrel fermented dark saison. It’s got some nice bacterial beasties to pucker things up as well, so I’m quite excited to give this one a shot. 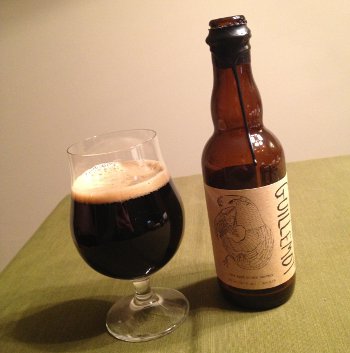 Tired Hands Guillemot Nebula – Pours a dark brown color with a finger of tan head. Smells amazing, full of tangy sour cherry character along with vinous aromas, some musty yeast and maybe even hints of chocolate. Taste starts with rich dark chocolate, then the sour cherries hit, tart but not overwhelming, blended well some of that red wine character as well as some oak. Not getting much bourbon out of this, but perhaps some of that oak or chocolate could be attributed to Mr. Beam. Mouthfeel is superb. This thing is just a joy to drink. Tightly carbonated and very smooth, this thing is dangerously quaffable. I got some alcohol warming in my belly, and I had to slow myself down cause I didn’t want to be done so quickly. Overall, this is another superb beer from Tired Hands, perhaps their best barrel fermented/aged beer yet, which is saying something. A-

Now I reallly wish I was able to get ahold of one of the Prunus bottles. Oh well, I guess I’ll just have to start going to these bottle releases earlier. Hopefully, someday they’ll open the Believer’s Club up again, so I can get me some bottles without going too crazy…