So after a particularly grueling day of work, I come home to find a package of beer from the West Coast, courtesy of Jay over at Beer Samizdat. Truly a sight for sore eyes, and filled with otherwise ungettable beer. I cracked this pale ale open on the spot, and it was just what I needed at that moment.

Grand Teton are apparently quite the trailblazers, literally rewriting laws back in the 80s and even introducing the concept of growlers to an unsuspecting populace… back in 1989! Truly ahead of their time. So let’s take a closer look at one of their staple brews: 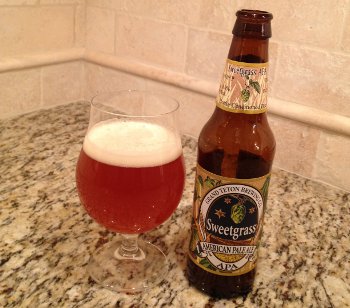 Grand Teton Sweetgrass American Pale Ale – Pours a hazy, bright orange color with a couple fingers of head and lots of lacing as I drink. Smells of bright citrus hops, some pine, and maybe even some crystal malt. Taste features a malt backbone that’s a reasonable platform for the bright citrus and pine hop flavors, finishing with a solid bitterness. Mouthfeel is light, crisp, and easy going, not quite something I want to quaff quickly, but it’s really nice. Overall, a solid, above average APA. B+

So yeah, not exactly a Zombie Dust killer, but few beers can aspire to that, and as I mentioned above, it was perfect for that time and place. Plenty of other exciting stuff in that package from Jay, which will start to filter into the blog in the next few weeks. Some superb stuff coming too, so stay tuned.