In the great fetch quest of life, breweries like Hill Farmstead are a boon to beer nerds because when all is said and done, you’ve got your hands on really good beer (unlike most fetch quests, which normally result in the equivalent of 20 cases of flat Bud Light). Fittingly, fetch quests are also sometimes referred to as FedEx quests, which, given the distribution reach of Hill Farmstead, is quite appropriate for most beer nerds. Fortunately for me, I’m within that narrow window of distribution, so periodically scanning the taplists and following twitter feeds of local bars sometimes pays off: 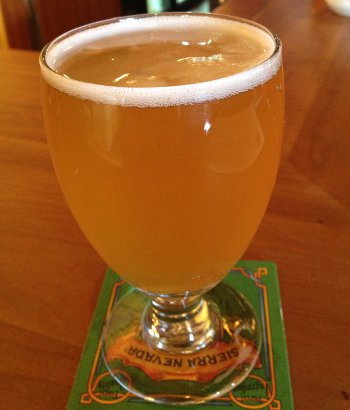 Hill Farmstead Arthur – Pours a hazy yellow gold color with a finger of white head that leaves tons of lacing. Smells of typical peppery saison yeast with some fruity notes, maybe lemon… Taste starts sweet and spicy, nice herbal character, eventually giving way to that lemony character. Just the faintest hint of funky tartness in the finish. Mouthfeel is well carbonated, smooth, the spice is there, and a very slight acidity that hits in the relatively dry finish. Overall, fantastic saison. A-

One of these days, I’m gonna have to get me to Vermont and visit Hill Farmstead, Lawson’s, and Alchemist. That or start engaging in more FedEx quests.