We all know I love me some Bourbon barrel aged stouts. I won’t shut up about it. But what is it about the glorious marriage of bourbon and beer that makes me love it so much? And how important is the provenance of the barrels used for beer aging? Can you really pick out different makes of Bourbon by drinking the beer aged in said Bourbon’s barrels?

Now, I’m no expert, but the general rule seems to be: if there was quality bourbon in the barrel, you’ll get quality beer out. Now, is using an Elijah Craig barrel all that different from using an Evan Williams barrel? If you took the same beer and aged a batch in each barrel, would you be able to pick which was which? Do Pappy Van Winkle barrels really contain magical properties above and beyond all other barrels? All bets are off when it comes to other spirits. Scotch barrel aged beer varies widely depending on the prevalence of peat smoke. Rum barrels are distinct. And so on.

So I realize that the grand majority of this post thus far has been unanswered questions. Fortunately for us, FiftyFifty Brewing Co. out in sunny California releases a series of barrel aged stouts every year, using a wide variety of barrels so that we can at least do some comparative drinking. What I’ve got here, courtesy of a cross-continental trade with Jay from Beer Samizdat, is a variant aged in 12 year old Elijah Craig barrels. Looking at the groupthink at BA and RB, these Elijah Craig versions seem to be the highest rated, though not by that much more than most others.

Speaking of which, those other variants have been showing up in local bottle shops, so I’ll have to lighten my wallet a bit and pick them up. Research, you know. For science. Anwyho, I couldn’t really wait to try this one, so I indulged pretty quickly: 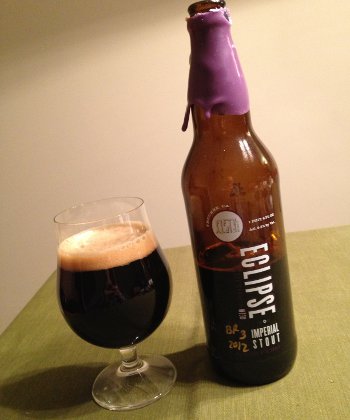 FiftyFifty Imperial Eclipse Stout – Elijah Craig (12 Year) – Pours a very dark brown color, almost black, with a finger of tan head. Smells of bourbon, oak, vanilla, and caramel, a really nice balanced aroma here, music to a bourbon barrel lover’s noseballs. Taste is filled with a well balanced, rich flavor profile that is similar to the nose: plenty of bourbon, a little oak and vanilla, lots of caramel. Light, pleasing roasted notes also come through in the taste, so it’s retaining its stoutness too… the mark of a balanced barrel aging job. Mouthfeel is full bodied, well carbonated but smooth and almost creamy. It’s not a chewy monster, but it’s not a chugging beer either – it’s really easy going for such a big stout. Overall, it’s a very well balanced, complex bourbon barrel stout. A

I’ve already got my hands on the Heaven Hill Rittenhouse Rye variant, which I imagine being distinct due to the fact that it’s a Rye barrel, not Bourbon, but I guess there’s only one way to find out!