Wisconsin’s own New Glarus Brewing Company has achieved a pretty fantastic reputation amongst beer nerds, especially considering that they don’t actually distribute outside of their home state. Still, beers like Wisconsin Belgian Red, a beer brewed with massive amounts of local cherries and aged in oak tanks, have piqued the interests of beer nerds all over the country. Alas, last year, a severe drought caused the Wisconsin cherry crop to fail. New Glarus brewer Dan Carey took the loss in stride, improvising a new beer using whatever cherries he could scrounge and making up the difference with apples and cranberries (which fared better during the drought). The result has been almost as well received as Wisconsin Belgian Red, and they’ve been calling this beer Serendipity, the “Happy Accident Fruit Ale”. 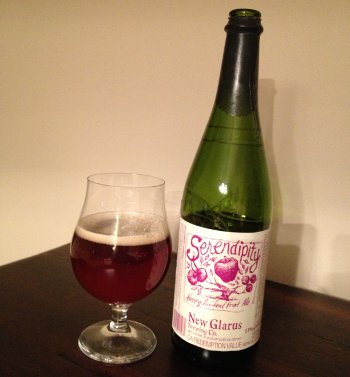 New Glarus Serendipity – Pours a striking, bright, clear amber color (robey tones, so much clarity) with a finger of off white head. Smells of straight up fruit juice and cherry fruit roll ups, a combo that actually works well enough. The taste is sugary sweet, lots of fruity character, maybe more cranberry flavor coming out here than the nose, but not quite the lunchtime snackfood flavor implied by the nose (this is a good thing). That fruit is a little tart, but nothing approaching real sourness. Mouthfeel is smooth but very well carbonated, which helps cut through the sweetness, though you do get a sticky sweet kinda finish. Still, it’s easy drinker, bright and crisp. This doesn’t taste much like beer. It’s kinda like one of them fancy designer fruit-flavored sodas, though it’s definitely more complex and tasty than that. I’m actually really enjoying it, though I’m having trouble rating. As non-lambic “fruit” beers go, this is probably the best I’ve ever had, and as someone who normally doesn’t put up with this sort of fru-fru nonsense, I have to admit I’m really liking this. So let’s call it a B+ and go from there.

My hyped-up midwest beer stash, accrued via trade, is dwindling at this point. I’ve got two left, and one I’m going to be laying down for a while. The other is a Mikkeller collaboration with Three Floyds, which sounds beautiful, if you ask me. In the meantime, we’ve got lots of other interesting stuff, including some more trade booty. Exciting stuff is on the way. Tomorrow: beer club. Don’t miss it.