Historically, the Jolly Rodger is a flag flown by pirates to frighten their victims into surrendering without a fight. The most common said flag featured a skull and crossbones, obvious symbols of death (other variants included full skeletons and things like hourglasses, all symbols of death). Due to the decline in piracy in modern times, the symbol has shifted somewhat. After some prissy British Admiral described submarines as “underhanded, unfair, and damned un-English”, a bunch of wiseass British sailors fashioned themselves a Jolly Rodger after a successful mission, and thus the Jolly Rodger began its continuing career as a military insignia.

These days, the Jolly Rodger seems to have been taken up by incessant copyright infringers, making “Talk like a Pirate day” into just a bunch of discussions about where to download new releases. It also seems that the Jolly Rodger has been pressed into service to help sell beer, so there’s that too. It seems that Drake’s Brewing out in California has utilized the Jolly Rodger for their annual Holiday seasonal. Each year is a different style, and this year’s is a good ol’ fashioned American barleywine. Be still my heart. Thanks to Jay for sending this my way! Ok, that’s enough babbling, let’s fire up µTorrent, download some porn movies, sink a Nazi vessel, fly our Jolly Rodger, and drink some beer: 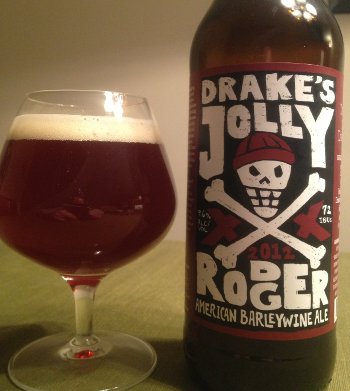 Drake’s Jolly Rodger American Barleywine 2012 – Pours a dark amber brown color with nice robey tones and a finger of whitish head. Smells of piney, resinous hops, with some crystal malts and maybe a little vanilla. Taste is surprisingly bitter, plenty of those piney hops, light malt, some booze, and did I mention bitter? It’s not disagreeably bitter or anything, I just wasn’t expecting it. Mouthfeel is relatively heavy, but it goes down smooth. Bit of a hot boozy feel, but again, not disagreeable. Overall, it won’t sink Nazi ships or scare beer drinkers into surrendering, but it’s a solid American Barleywine, hoppy and bitter, and I likey. B+

Drake’s has a pretty small footprint, so I probably won’t be stumbling across any more of their stuff anytime soon, but they seem to make some nice IPAs and they have this thing called a “barrel house” which sounds rather nice. In any case, I’ve got more trade booty coming, and, you know, local stuff too.