Let’s talk label artwork for a minute here. Three Floyds obviously employs talented artists for their labels and branding, but on the other hand, what the hell? Their main logo has a skull with batwings attached, kinda like an Ed Hardy dudebro logo. Then there’s the label for Broo Doo, their fresh hop harvest ale. It features what appears to be a troll doll in a sailor’s outfit, but instead of the typically furry hair, we’ve got a sorta hop/hair hybrid thing going on. Now, this is a little odd, but kinda par for the course in terms of beer labels. However, in the background, there’s also a unicorn attempting to perform a Lucio Fulci-esque eye gouging maneuver on what appears to be a Disney princess (update: it may be Princess Peach, but the jury is still out on that one). And behind that, there’s a fairy tale castle on fire with a rainbow flying over it. None of which mentions the outer portion of the label, which is all pastels, neon swishes, and stars, like something out of My Little Pony. In a bit of self-awareness, they have at least emblazoned the sides of the labels with the slogan: “It’s not Normal” Well, they got that right.

I can’t decide if it’s the worst or most awesomest label ever, but in any case, it’s what’s inside the bottle that counts, so let’s get to it: 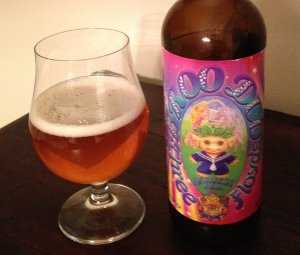 Three Floyds Broo Doo Harvest Ale – Pours a clear golden (they say “apricot”) color with a finger of white head. Nose is all citrus and piney, with some floral and grassy, herbal, almost spicy hop notes coming through too. The taste has a crystal malt sweetness that provides a nice platform for the various hop flavors, which tend more towards that grassy, herbal, almost spicy side than the nose, though the citrus and pine are still quite prevalent. It could just be my imagination, but it does feel like the age has subdued some of that hop character, making this more sweet than I’m guessing it is when fresh. No info on exactly what hop varieties are used, but I’m guessing Simcoe/Cascade, Centennial, and maybe some CTZ, but who knows? Mouthfeel is crisp, well carbonated, medium bodied. Not quite something I’d call quaffable, but it’s still very easy to drink. Overall, another strong offering from FFF, I really like it, though I don’t think there’s much to differentiate it from the throngs of similar beers and it’s far from the best harvest ale I’ve had (but then, there is the freshness factor). A tentative B+

I’ve got a few more FFF beers left in the pipeline, but hoo, I’m going to want to get me some more of their stuff at some point. They are seriously pretty awesome at this whole beer thing.