Tröegs Scratch series of beers is always interesting, but every once in a while, they hit on something great. This beer, brewed in honor of (or perhaps to spite) the (now lapsed) Mayan apocalypse, is a big imperial stout. Their description sez: “If your tongue doesn’t disintegrate as a result of the birthday party cheesecake jellybean BOOM, it most certainly will wreak major havoc on your taste buds.” I don’t know what the “birthday party cheesecake jellybean BOOM” thing means at all, but I stumbled onto this beer on tap, and it melted my face. Makes me wish I made the trip out to Hershey to pick up some bottles. But who knows, maybe they’ll make this an addition to their regular lineup, a la Flying Mouflan. A man can hope. 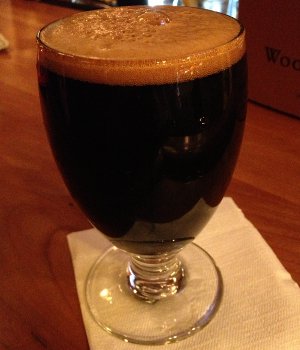 Tröegs Scratch Beer 83 – 2012 (¿Impending Descent?) – Pours a deep black color with a finger of brown head. Smells lightly of chocolate and a little roast – not a strong aroma, but that’s more the bar/glass than the beer (this has happened before at this place). Taste is full of rich malt sweetness, light caramel and plenty of chocolate with just a hint of roastiness peeking through and lingering into the aftertaste. Nice, well balanced bitterness in the finish. It’s a great imperial stout flavor profile. Mouthfeel is full bodied, thick, gooey, and a little chewy. Lightly carbonated but enough to be appropriate for the style. It’s a big, heavy beer, a sipping beer, but I really don’t detect much booze at all either, which is impressive. Overall, fantastic, absolutely delicious beer. I want moar. A

This could easily have made my top 40 for 2012, but I had lazily let the notes linger in Evernote instead of reviewing it. Perhaps I’ll make an exception for next year. If I remember. I doubt there are any bottles of this hanging around, but if I see any, I’m going to snatch them up.