The two main Rodenbach beers are blends of oak-aged beer and “young” beer. The Grand Cru is mostly 2 year old oak aged beer, while the Classic leans more heavily on the young beer. Well, a few years ago, Rodenbach started putting out these Vintage beers, which are unblended and comprised solely of 2 year old oak aged beer from a single foeder (the giant oak vats they use to age their beer). This particular bottle was released back in 2011 and came into my possession by a fortuitous turn of events. By which I mean that it was sitting on the shelf and I happened to pick this over the 2010 edition… I’m a huge fan of the Grand Cru, so my hopes were high for this one: 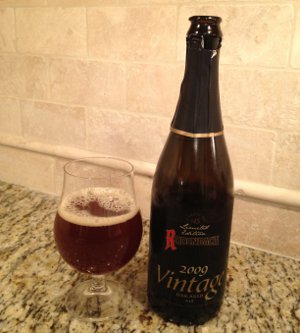 Rodenbach 2009 Vintage Oak Aged Ale (Barrel No. 145) – Pours a relatively clear, dark amber brown color (robey tones, so much clarity) with half a finger of bubbly white head. Smells of vinous fruit, cherries, oak, and vanilla, with that sour twang. Taste starts off very sweet and fruity, tons of sour cherry flavor, maybe some jolly rancher, all of which is more prominent than the Grand Cru. The sweet and sour vinegar character is more prominent than the Grand Cru, but then the oak and vanilla kicks in, tempering that sweetness a bit, evening out the brew. Sourness is present and assertive, but not overpowering. Mouthfeel is a little brighter and more acidic than the Grand Cru, but it’s well carbonated, rich, and full bodied. The sourness keeps it from feeling heavy though, and it goes down pretty easy. Overall, this is fantastic stuff, a little more vinegar and less oak than the Grand Cru (odd, considering the unblended nature of this one), but certainly worthy. A-

Rodenbach Grand Cru is one of those beers that turned me into a lover of sour beer, so perhaps it’s hard for these other vintages to stack up. They clearly share a similar character, and I’ll probably continue to seek out any of Rodenbach’s specialty batches, but the Grand Cru just hit my tastes perfectly.