I bought this beer a while ago, and then I saw on the interwebs that the next iteration (XV) was just released, so I figured it was finally time to raid the cellar and drink this sucker. I’m a big fan of the regular Old Rasputin, and that resilient video-game-boss-like historical figure is pretty interesting too, plus we all know my thoughts on barrel aging, so I was excited for this one (despite the rather high price tag): 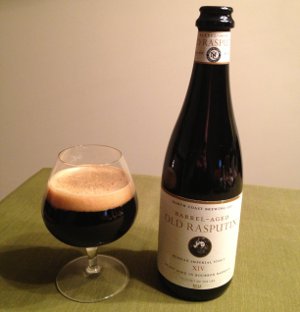 North Coast Old Rasputin XIV Anniversary – Pours a very dark brown color with a finger of tan head, great retention, tons of lacing. Smells of bourbon, oak, vanilla, caramel, and that citrus and pine hop character from the regular Old Rasputin… Taste features that rich bourbon and caramel flavor, some oak and vanilla, maybe a hint of that roasted malt character, and some light hop bitterness in the finish. Not like a Black IPA or anything, though this does retain a lot of hop flavor. The bitterness is appropriate for a big stout though. Mouthfeel starts rich and chewy, but it dries out a bit, finishing with seemingly less body. Sometimes I don’t like that, but it works well here. Ample carbonation also helps cut the rich flavors while still allowing them to shine. Overall, a very good Bourbon Barrel aged stout, though I don’t know that it really warrants the price tag. Still, if I ever run across a cheaper bottle of the stuff, I’ll pick it up in a heartbeat. A-

This is a sneaky one. I thought it was a 22 oz bottle, and it certainly looks at least bomber sized, but it’s only 500 ml (16.9 oz). You can get a 4 pack of BCBS for a couple bucks more (and if some BA nerds are to be believed, some places jack up the price of BA Rasputin to well above that, on the order of $26-$30 which is a little ridiculous), and that stuff will kick your arse. Not that this is bad, the A- is nothing to whine about and I’m glad I tried it, but still. North Coast has not endeared themselves to me with these prices (Old Stock Cellar Reserve is no slouch in that department either, though at least that bottle looks like 500 ml). I’m sure they’re all broken up about it.