What do you do when your bank threatens to chain your brewery’s doors shut if you don’t make your loan payments? Well, the owners of Founders went out and bought a pair of bolt cutters. Fortunately, they didn’t have to resort to that backup plan, and the brewery has grown into one of the country’s most respected beer makers. To celebrate their 15th anniversary, they released a beer named after said backup plan, a whopping 15% ABV barleywine. It’s another blend, with some of the beer aged in bourbon barrels, some in bourbon barrels that were also used to age maple syrup (which, by the way, I’d like to get ahold of sometime), and some just straight up barleywine.

It’s part of Founders’ backstage series of beers that were previously only available on tap at their brewpub in Michigan, and as such, their was a fair amount of attention paid to the release by beer nerds. Nowhere near the shitstorm surrounding CBS, but not quite the resounding “meh” of Frangelic Mountain Brown (which I enjoyed well enough). So these showed up on shelves, but they didn’t last long at all… 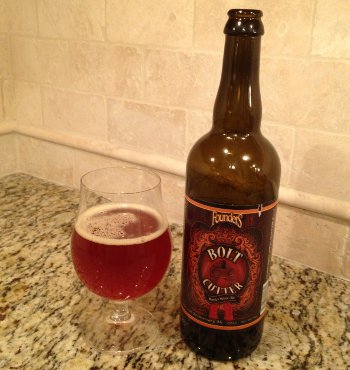 Founders Bolt Cutter – Pours a beautiful looking bright orange/amber color (roby tones, so much clarity), with half a finger of quickly subsiding head. On the other hand, I’m getting some lacing and there’s a thin film of head that kind of retains itself all throughout the experience. Smells of rich caramel and vanilla, with some fruity malt character peeking through, some light citrusy, grassy hops, and maybe a hint of boozy bourbon heat. Taste is full of rich caramel, some fruity notes, with those citrusy hops taking on more of a flavor component than expected, a very light bourbon note hitting in the middle, and a surprising but welcome bitterness in the finish. Mouthfeel is much lighter than expected. Still on the upper end of medium bodied, but not as heavy or foreboding as I’d expect. Certainly not a quaffable beer, but not really a sipper either. Something you can take a swig of, but not quite a gulp (these are scientific terms here). As such, there’s a big warming alcohol component, maybe a little burn in the mouth, but I gotta say, it’s cold outside, so this is nice. A little stickiness in the finish, but it works with the tenor of the beer. Overall, this is really good. Not mind-blowingly spectacular, but close. Really strong, well crafted, complex, and tasty. Truth be told, it might be my favorite Founders beer… A-

Another rock-solid offering from Founders. I don’t know what’s next for them. There’s supposed to be another Backstage release in April, but I don’t think it’s been announced yet (beer nerds are still salivating over the March release of KBS). Oh, and then there’s that bottle of Founders Breakfast Stout that’s been sitting in my fridge for almost exactly 2 years at this point (yes, I know, coffee is supposed to fade with time, but I actually didn’t care for the regular Breakfast Stout, so that will probably be a good thing in my book).