This year’s Christmas beer consumption here at Kaedrin has been rather eclectic. I’ve had some old standards, like the Anchor and Sly Fox offerings, but most of the beers I’ve had have fit into the elusive “do whatever you want” category of Christmas beers. It doesn’t really matter what’s in the beer, so much as that it has a Christmassy label. A prime example is today’s beer, Three Floyds Alpha Klaus, which is billed as a “Christmas Porter”, whatever that means. From their description, it’s basically a straightforward porter with a big addition of “strange American hops”. No idea what’s strange about them, but let’s find out, shall we: 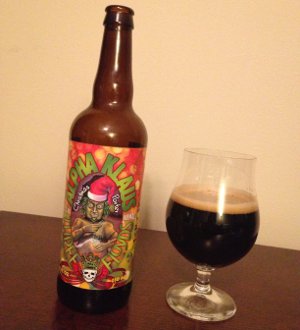 Three Floyds Alpha Klaus Christmas Porter – Pours a very dark brown, almost black color with a finger of tan head and reasonable retention. Smells of typical porter toast and roast, maybe some coffee, but also a big juicy hop component that’s really quite nice. Taste follows the nose. Lots of toasty, roasty malt, but it’s tempered considerably by prominent citrus and pine hop flavors. Has a well matched bitterness in the finish, with both the hops and the dark malts conspiring to offset whatever sweetness that remains. Mouthfeel is medium bodied and this is eminently drinkable stuff, goes down real easy. Not too sweet, not too bitter, not too dry, just well balanced. Overall, porters just ain’t my style and they tend to feel kinda samey to me, but I’m enjoying this and it actually does something interesting with the style. I can see why it’s highly regarded… even if it’s not my favorite beer evar or anything. B+

Special thanks to my new pal Joe in Chicago who slung these Three Floyds beers my way. Look for more reviews in the near future, including some Top 100 heavy hitters.