The 5th installment of The Bruery’s 12 year long project matching beers with each verse of the 12 Days of Christmas. For the patient among us, the idea is to cellar each installment until 2019, when 12 Drummers Drumming is released and you can have an epic vertical tasting. Of course, the beers are ready for drinking at the time of their release too, and I was a big fan of both 3 French Hens and 4 Calling Birds (alas, I never got my hands on the first two installments), so I was really excited for this latest installment, 5 Golden Rings. It’s the first light colored beer in the series, though I suppose it makes a bit of sense given the name of this verse. On the other hand, the verse doesn’t quite mean what you might think. Courtesy of The Dogs of Beer:

Modern artwork associated with the song typically depicts five bands of gold, like rings you’d wear on your finger. And 5GR is no exception, it’s not obvious at first, but the swirl of the label is made up of repetitive groups of interlocked five rings. But as I somewhat alluded to last year, the song is about preparing for a Christmas festival, with the first seven verses describing birds (game or otherwise) that were being brought to the festival as food. In this case the five golden rings referring to five male, ring neck pheasants.

Huh. Never knew that. Well, let’s crack this thing open and see how it fares: 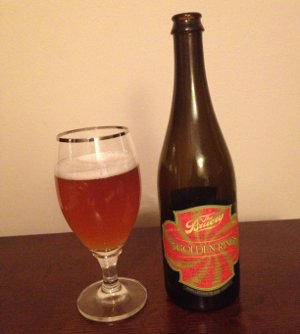 The Bruery 5 Golden Rings – Pours a sorta turgid, cloudy golden orange color, sorta brownish, with a finger of bubbly white head (surprised I got that much out of it). Smells full of clove, with other spices making an appearance as well as a bready, cakelike aroma that’s quite pleasant. I get the impression that this is actually spiced, not just relying on Belgian yeast character to provide such aromas. Taste is very sweet, with that spiciness from the nose taking a back seat to sugary sweet malts and booze. It finishes on a surprisingly juicy, boozy note (upon closer inspection of the bottle, I’m guessing this is due to the pineapple juice used in brewing and yes, as I drink more, that pineapple is pronounced throughout the taste). As it warms, I get some more of that peppery, bready yeast, which actually helps temper the sweetness. Mouthfeel is heavy, a little sticky, could potentially get cloying, with low to moderate carbonation. Some light booze astringency and maybe some warming alcohol in the belly, but this isn’t a gulping beer and as such, that warming factor doesn’t play too much of a role. Overall, I don’t feel like this came together as well as The Bruery hoped. It’s not undrinkable or anything, it’s a solid brew, but perhaps a bit too sweet and strong. I’m really curious to see how it ages. From what I’m having here, it could go either way… If the age dries it out (which sometimes happens with older strong Belgian pales, like Tripels) and the booze mellows a bit, that could perhaps work wonders with this beer. Or not. But in the here and now, it’s not really lighting the world on fire. B

So my Bruery-fueled, liver-destroying, wallet-lightening, amazing-beer-filled winter continues. If I can clear some time off my schedule to knock back one of their true monster beers, I’ll have a review of that coming soon. And I’m sure I’ll hit up that bottle of Cuir that’s been in my cellar for a while too. Might as well just make this a full year of Bruery, instead of just a winter.

4 thoughts on “The Bruery 5 Golden Rings”