Sly Fox is one of the throngs of brewers that puts out a vintage dated Christmas beer with changing recipes every year. It’s not quite as storied or classy as, say, Anchor’s definitive Christmas beer series (stay tuned, as we’ll be covering that one in the near future as well), but they’re a good local alternative. I could be wrong, but I believe this is also the first year that Sly Fox has canned their Christmas Ale (usually only available in 750s or on tap), and the label features nifty to/from labels, which means my coworkers will probably be getting a can of this stuff on their desk just before Christmas. So let’s fire this thing up: 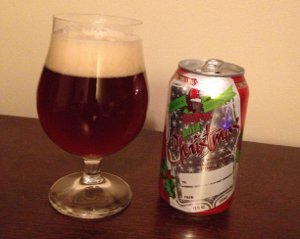 Sly Fox 2012 Christmas Ale – Pours a deep, clear, dark amber color with a couple fingers of fluffy, light tan head. Smells almost exactly like a gingerbread cookie or gingersnap or something. Obviously that spicy component is expected, but there’s a sorta cookie aroma, maybe some vanilla too, that differentiates this. Other spices are apparent, cinnamon, clove, the usual suspects, but ginger seems to be the defining spice. The taste isn’t quite as cookie-like, but it’s got a hint of creaminess in the middle and the spices are more prominent in the beginning and in the finish, particularly ginger. I don’t normally love ginger in beer, but this is actually working well enough for me (still glad I didn’t spring for the 750 though). Mouthfeel is smooth and velvety, those hints of creaminess apparent, a very slight harshness from the spice, and a light to medium body that allows you to gulp the stuff down quickly, if you so desire. Overall, very solid winter warmer, about on par with last year’s offering, but also distinct. B+

I will continue to look forward to this beer every year, along with the stalwarts like Anchor. Speaking of which, stay tuned for another Anchor Double Feature (see last year’s). Alas, no 2010 beer left, so I can’t do a full 3 year vertical, but in a few years, I should be able to do a nice 4-5 year vertical of Anchor. Who knows, I might even start doing verticals for Sly Fox Christmas…