I discovered Samichlaus a few years ago and immediately sought out some bottles to lay down in my cellar. Breaking out a vintage bottle on Christmas eve whilst I belatedly wrap presents is quickly becoming one of my favorite Christmas traditions. Last year, I cracked open bottles of both 2009 and 2010 and was quite impressed with how well the age treated the 2009 edition.

Today’s beer was actually bottled in 2007, but it’s also the Helles version of the beer. Helles is German for “bright” and this beer is supposed to be a paler version of the traditional Samichlaus, but the trouble with this is that the beer has such a high original gravity that the end result looks more or less the same as the traditional variety. Back in the day, Michael Jackson noted that: “In recent years the brewery has accepted the traditional view that Christmas and winter beers should be dark.” This translates to the fact that the brewery only puts out the Helles every four years. However, it appears that they haven’t completely given up on the idea, as I’ve seen 2011 bottles around.

In truth, this may be the oldest beer I’ve ever had (aside from a miniscule sample of 2003 120 Minute IPA I snagged a while back, but I don’t think that should count). Fortunately, I bought this just last year, so it’s not like it was sitting in my cellar for 5 whole years. Let’s see if age has treated this one well: 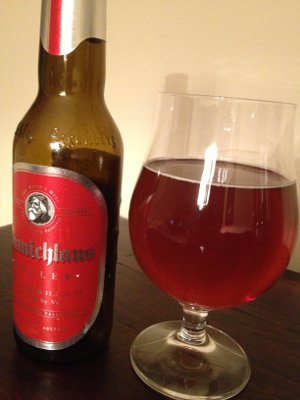 Schloss Eggenberg Samichlaus Bier Helles 2007 – Pours a clear amber/orange color with visible sediment (my bad) and next to no head at all, just a thin film of white head fading quickly to a ring of head that eventually disappears completely. Smells strongly of dark fruits, cherries, sweet malts, and maybe some booze. Actually really nice, better than what I remember from other Samichlaus vintages. Taste is very sweet, intense flavors of caramel giving way to fruitiness, plums and cherries, and a sorta rummy booze liqueur character pervading throughout. Mouthfeel is sticky and syrupy, but carbonated enough that it doesn’t get cloying, lots of alcohol heat, a sipping beer for sure, but it’s got a very smooth, almost creamy texture that I’m going to credit to the age of this particular bottle. Though I’ve never actually had the Helles before, given my experience with the regular Samichlaus, I’m going to say the age has actually improved this beer considerably. I’m really enjoying this more than I expected. It feels more like an old English Barleywine than a doppelbock (or helles, for that matter), and I’m guessing that a bottle of this stuff would age really well for many years (even more than the 5 year old bottle I’ve got here). A-

At this point, I regret not loading up on the 2007 when I could. But I still have a few bottles of the 2009, and each year thereafter. So let’s just say, you’ll be seeing this every year.