Along with the recently mentioned Nøgne Ø, HaandBryggeriet is at the vanguard of the burgeoning Scandanavian craft brewing movement, bringing big, bold flavor to the land of trashy Euro-lagers, and turning quite a few heads in the process. Including beer dorks like myself, who have read the raves and eventually plunked down some hard earned dough to get my hands on some of their stuff. I don’t know much about them and basically picked up this bottle solely on the general enthusiasm Jay has for their work, choosing their Norwegian Winter Ale because we are suckers for that sort of thing here at Kaedrin. Also, they only made 2160 bottles of this stuff, most of which was presumably hoarded by Norwegian beer nerds. How could I turn this down?

Bestefar is the Norwegian word for “grandfather”, referring to the father of Father Christmas, who, if the label is any indication, possesses the magical power of beard growing. I guess this is not a surprise, as it’s coming from the land of the vikings. And I’m happy to report that, in my limited Norwegian beer consumption, this is the “best by far” (as they say on the bottle): 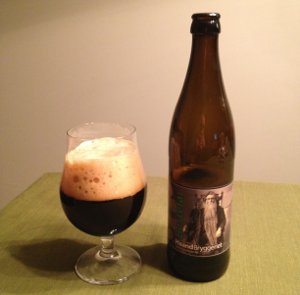 HaandBryggeriet Bestefar – Pours a very dark brown color with 3-4 fingers of brown, fluffy head. Smells of roasted malt, chocolate, maybe even a little coffee (but nothing overpowering). Taste is deep roasted malts, with some chocolate and coffee and maybe just a bit of caramel. There’s also a sorta elusive hop character that faintly chugs along in the background. Different flavors pop in and out of prominence as I’m drinking, though all those flavors are always there. But sometimes I’ll take a sip, and I’ll really feel the roast or the coffee. Next sip, I’ll get more chocolate. And so on. Interesting. Mouthfeel is medium to full bodied, a little chewy, well carbonated but not quite effervescent (really hit the balance well here). Overall, this feels more along the lines of a Baltic Porter or Imperial Stout than a Winter Warmer, but who’s complaining – it really does make a great cold-weather beer and it hit the spot perfectly. A-

Let’s just say that I can’t wait to get my haands on some more of their stuff. Bryggeriet on, I say. Ok, enough puns, but I was quite impressed with these folks and will gladly seek out more of their beer.