It’s been a while since I’ve played Belgian beer roulette, so I figured I’d take a flier on this beer, cryptically designated a “Grand Cru”. Just what is a Grand Cru, you ask? That’s an excellent question; it doesn’t mean anything.

In wine, the phrase is clearly organized and regulated. It refers to the highest level of vinyard classification. Something about terroir. I don’t know, what is this, a wine blog? The point is that while it’s formally defined for wine, it was basically adopted in the beer world as a marketing tactic. Most beers labeled as Grand Cru seem to be imply that it’s a style, but that’s not at all the case. You can get a Belgian Strong Pale, like the 9.5% ABV Southampton Grand Cru, or today’s beer, Bink Grand Cru, which is a 13% ABV Belgian Strong Dark monster, or even Rodenbach Grand Cru, which is a sour Flanders Red weighing in at just 6.5% ABV. That’s a pretty disparate range of flavors and styles right there.

I suppose you could say that it generally represents an improved or more elaborate offering than the brewer normally makes, perhaps their “grandest” beer. Or not. Like I said, there’s no actual rules for what constitutes a grand cru in the beer world. So roulette it certainly is, with Brouwerij Kerkom’s winter beer (aka Winterkoninkske!) in my glass: 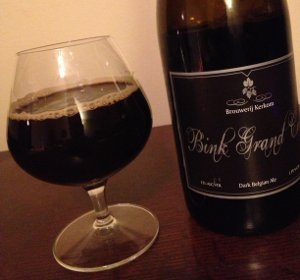 Bink Grand Cru – Pours a very dark brown, almost black color with minimal light tan head. Nose smells quite sweet, a little Belgian yeast character, maybe some molasses, a lot of chocolate. The taste is filled with rich, sweet, dark malts, a little spice, a hint of dark fruit, and again with that big chocolate character. Oh, and booze. Very boozy. Intense flavors all around, but not overwhelming. Mouthfeel is surprisingly well carbonated for such a big beer, making it seem perhaps a bit less heavy than it really is, which is actually nice. Spice and booze make themselves felt, but nothing too unweildly. The booze also warms things up a bit, maybe just a hint of burn in the mouth. Full bodied, but not super chewy or anything. It’s a sipping beer, but it’s not hard to drink. I wouldn’t call it well balanced, but it’s working pretty well. Overall, big, complex, uncommon flavor profile, I enjoyed it upon first taste, but it just got better as I drank, which is nice for such a big beer. A-

This actually reminded me a little of Tired Hands’ Westy 13, though it’s got a more chocolate and booze component than Tired Hands’ brew. Ok, so maybe it’s just that they’re both 13% and dark and rich. Still, both are excellent. Another successful session of Belgian Beer Roulette, and I live to play again.