Unlike the harvest ales I’ve covered so far this year, Ommegang’s take on the trend is decidedly less hop-based, instead focusing on a complex malt bill consisting of freshly picked barley, oats, wheat, and rye. This is pretty much in line with Ommegang’s identity of Belgian brewing in America, as traditional Belgian styles aren’t very hoppy, instead focusing on malt and yeast for their flavor profile (perhaps part of the reason for good Belgo-Scotch relations, but I digress). Clocking in at 5.8% ABV, it’s also one of the lower-gravity offerings I’ve seen from Ommegang (the only thing lower that I can think of is Witte). Let’s see how they fared with this harvest ale: 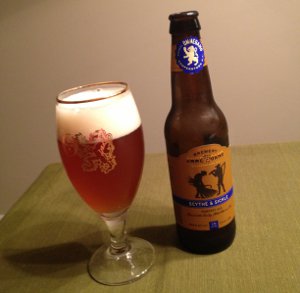 Ommegang Scythe & Sickle – Pours a darkish golden orange color with a few fingers of fluffy white head and plenty of lacing. Smells strongly of banana esters and a little clove, big Belgian yeast character. Taste pretty much follows along, big and bold bready, biscuity flavors along with a lot of assertive Belgian yeast spice, a light fruitiness, and even a little bitterness emerging in the finish. Mouthfeel is highly carbonated and effervescent, but medium bodied and easy to drink. Spicy with a dry finish too, probably a good accompaniment with food. Overall, this is a really enjoyable beer, and it would make a fine go-to beer during this time of year. B+

So Ommegang recently redesigned their website and rebranded their entire lineup of beers. I have to say that I find most of this unnecessary, though not entirely unpleasant. I suppose their label designs were in a bit of a rut, and the only label I’ll really miss is Hennepin, but the new labels with all the silhouettes. Their website certainly needed an update and the new design is pretty but… damn, it’s pretty much unusable. It’s like one of them horrible Flash sites from ’02 or something. As usual, it’s what’s in the bottle that counts, so as long as Rare Vos, Hennepin, Abbey Ale, and Three Philosophers are the same beer, I don’t really care about the labels… Next up on the Ommegang front is their 15th Anniversary ale, which appears to be another Belgian Strong Dark Ale…