Maryland’s Evolution Craft Brewing Company has been making the rounds in the Philly beer scene for the past few months, and I’ve been lucky enough to try a few of them. In particular, I’ve enjoyed their IPAs, which are decidedly of the East Coast variety. I’m actually not a big proponent of making that coastal distinction (there’s room for differing takes on a style within that same style – an IPA is an IPA, dammit), but apparently that’s a thing, and Evolution’s Lot series of IPAs certainly qualify as East Coast. There’s more of a malt backbone, perhaps a bit less straight bitterness, but to me, it’s still the same style. Whatevers, here’s Evolution’s flagship IPA: 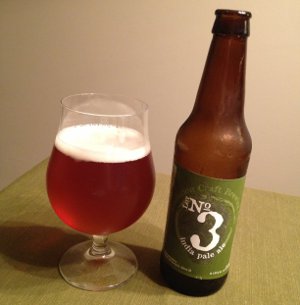 Evolution Lot No3 IPA – Pours a clear golden orange color with a finger of whitish head. Smells of big, piney hops, with some orangey citrus and floral notes. Taste is along similar lines, tons of citrus, pine, and floral hop character, with a solid malt backbone and a light bitterness in the finish. Mouthfeel is well carbonated and medium bodied, drinks really well. Overall, this is a very well crafted IPA, would make a great go-to beer. B+

At this point, I’ve actually had Evolution’s Lot No6 a few times – it’s a double IPA that’s basically got the same flavor profile as the above, but amped up a little more. It’s a really nice beer, and I’m happy to see Evolution expanding. Perhaps I’ll get my hands on some others soon…