Hey, that St. Bernardus bottle looks weird. Oh God, what have they photoshopped onto that poor monk now? Is that a… kimono? What the hell? Tokyo? Did St. Bernardus make a new beer? Why was I not informed!?

Yeah, so while American breweries are pluralistic and ephemeral, engaging in limited-release arms-races and resurrecting dead styles, a lot of older breweries like St. Bernardus have a stable, tried-and-true lineup that doesn’t change much, if ever. This isn’t to badmouth St. Bernardus, a brewery we have the utmost respect for, as our archives demonstrate. For those keeping score, that’s 3 A ratings, 2 A- ratings, and one each of B+ and B. Truly a brewery to be reckoned with, which is why I jumped when I saw the poor monk photoshopped into a kimono. Apparently St. Bernardus is opening a branded Belgian beer pub in Tokyo, and brewed this one-time batch of beer to commemorate the occasion (most went to Tokyo, but some was reserved for normal distribution avenues in Europe and the US).

As it turns out, I grabbed the bottle so quickly that I didn’t pay attention to the price tag, which came in at a hefty $20+ for a 750. Now, lord knows I’ve pretty much broken down that $20 barrier, especially for the barrel aged monsters I’m addicted to, but this thing’s a 6% ABV Wit beer? Ooooookkkkaay, well, maybe there was a ridiculous markup at the bottle shop and most places that get this one-time brew are more reasonable. Apparently this brew uses malted wheat whereas a lot of traditional wit beers use unmalted wheat. Or something. I don’t really grok it, but perhaps that explains why this didn’t feel that much like a wheat beer (though I kinda loved it): 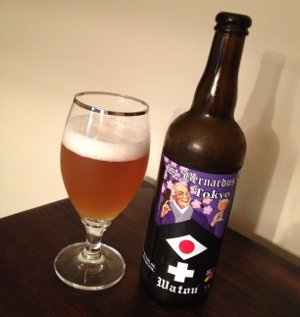 St. Bernardus Tokyo – Pours a very cloudy, darkish yellow color with a couple fingers of fluffy white head. Smells of pure Belgian yeast, lots of spice (clove, coriander), bready aromas, and even a little light fruitiness. It seems like the nose of a Belgian Pale rather than a Wit (indeed, I get very little wheat character from this at all). Taste is again mostly defined by that bready, biscuity Belgian yeast which imparts lots of spicy flavors, along with some very light fruitiness and maybe even a hint of grassy, herbal hops (but maybe that’s just my imagination). As it warms up, some complexity in the form of that trademark wheat character starts to emerge, though this still feels like a Belgian pale… Mouthfeel is highly carbonated and effervescent, with a nice spicy feel. Finishes pretty dry too, making this a good beer to match with food. Overall, this is an excellent beer, much better than I was expecting… though I’m still not sure it justified the price tag. A-

So all’s well that ends well, and I’m really glad I got to try this thing, but I find it hard to recommend due to the price. If you’ve got the cash or hey, if you find a cheap bottle, go for it. Otherwise, I’d say hit up the Watau Tripel, which is probably about 3 times cheaper and probably better…