North Carolina’s Duck-Rabbit Brewery fancies themselves “Dark Beer Specialists”, an interesting move in an industry that practically requires IPAs (they don’t even do a Cascadian Dark Black IPA or whatever it’s called). They’re a small brewery with a horrible but somehow charming website and a growing distribution. My experience with them has been limited, but someone brought a couple of their staple brews to the last beer club. Their porter was, well, a porter. Well crafted, but not particularly my thing. We didn’t get to the Milk Stout that night, but I managed to wrangle it on the way out, and it’s been waiting patiently in my fridge ever since. So here goes nothin: 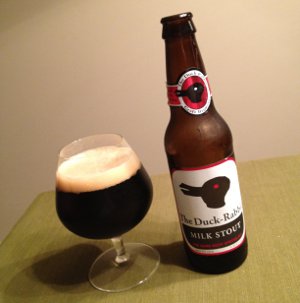 Duck-Rabbit Milk Stout – Pours a very dark brown color with a finger of tight tan head. Actually smells pretty sweet, with a sorta chalky aroma I associate with milk stouts and it’s a little light on the typical roasted malt character. Taste is again heavy on the sweetness, with the roast character emerging in the middle and intensifying through the finish, which has a surprisingly dry bitterness that doesn’t quite fully balance out the initial sweetness. Mouthfeel is highly carbonated at the start, medium to full bodied, with a little sweet acidity. Overall, a solid entry in the style, but not something I’d go out of my way for… B

While neither beer particularly wowed me, I also haven’t really had any of their bigger beers that would have been more interesting anyway. I’d love to try their Baltic Porter, Wee Heavy, or Rabid Duck (imperial stout). Heck, even their Schwarzbier or Duck-Rabbator (doppelbock) sound like they could be fun. All of which is to say, you’ll probably see some more from these folks here on the blog someday.