I’m not that big of a fan of Allagash Black, a Belgian-style stout that sorta mashes up stouts with Belgian Strong Darks… and makes me wish I had one or the other. Don’t get me wrong, it’s a fine beer, but not one of head-exploding glory like I expect from a brewer of Allagash’s caliber. The solution to this conundrum? Put it in old Jim Beam bourbon barrels, of course! Alas, that treatment doesn’t seem to have done much to improve my feelings on the beer: 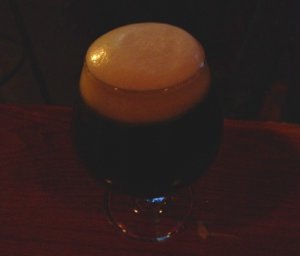 Allagash Bourbon Barrel Black – Apologies for the craptacular picture (It was dark!) Pours a black color with a couple fingers of light brown head that puffed up higher than the lips of the glass. Not picking up a ton in the nose (stupid overflowing glass), but a little musty roast and a hint of bourbon are there. Taste has lots of those roasted malts and plenty of boozy bourbon. There’s some complexities emerging as I drink, but it all feels a little sloppy. Mouthfeel is less carbonated than regular black; a little richer and creamier, but also much boozier. This isn’t quite as balanced as I’d like. I’d gladly drink more of this, but it’s a little disappointing and messy. B

Well, I guess they can’t all be winners (in terms of both Allagash and bourbon barrel beers), but it’s not like this one was horrible either. I’m always looking forward to new Allagash specialties and lord knows I can’t resist bourbon barrel aged beers…