Previously, on Pretty Things Beer and Ale Project: ¡Magnifico!, a 3.4% ABV, charitably hopped Belgian Pale Ale. Today, we’re talking about Pretty Things’ first American IPA, the prospect of which had beer nerds positively salivating. It’s named after a bird or something (Wikipedial describes the males as having “extensively red or yellow underparts”) and it’s brrewed with the new hotness in American and New Zealand hops (Galaxy, Bravo, and Citra). They’re saying that this may thus be one of them limited supply beers that fly off the shelves due to the scarce availability of trendy hops and a refusal to compromise on the recipe. So drink ’em if you got ’em, cause these ain’t aging beers and they probably won’t show up again until next year. Meadowlark and ¡Magnifico! showed up on shelves around the same time, but a week later, the Meadowlark was gone, while ¡Magnifico! was still hanging out as of this past weekend. I’d say check them both out, if you can find them: 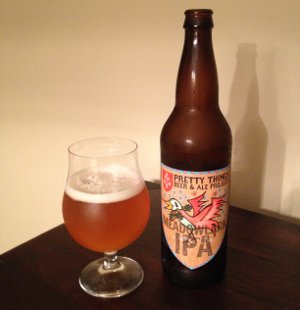 Pretty Things Meadowlark IPA – Pours a slightly hazy golden orange color with a finger of white head and good retention/lacing as I drink. Big aromas of sugary sweet citrus and pine, maybe some floral notes, one of those beers you could just sit around and sniff for a while. Taste is sweet with a well matched bitterness emerging in the middle and through the finish. Again, juicy citrus and pine flavors are prominent in the taste, well balanced with it all. Mouthfeel is well carbonated, but tight and smooth and almost quaffable. Overall, excellent, well balanced IPA. A-

I feel like I’ve been saying this about an awful lot of breweries, but Pretty Things continues to impress. Though they’ve previously been focused mostly on Belgian and English styles, this thing shows their impressive range. Another brewery that may have elevated itself to “Buy anything of theirs that I see” status…