The Old Ale style is a somewhat nebulous one, and there’s a lot of overlap with stuff like Strong Ale and Stock Ale (which are terms sometimes used interchangeably with Old Ale), but near as I can tell, there actually are a few distinguishing characteristics. They’re generally pretty high in starting gravity and relatively low in IBUs (sorta like an English Barleywine or a Scotch Ale), but they display a lower degree of apparent attenuation (meaning that there still a lot of residual sugars (dextrin) in the finished product). As the style name implies, these beers are also aged for a long period of time before distribution. This aging develops some interesting flavors along the lines of a lightly acidic, fruity malt character. Historically, given the challenges with sanitation in olden times, there was almost certainly some of that funky Brettanomyces character that came through… however, I don’t think most modern examples have that feature (unless specifically designated as such). I certainly didn’t detect any funk in Founders’ typically solid take on the style: 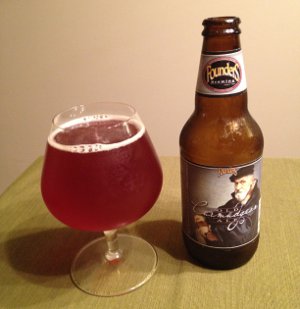 Founders Curmudgeon Old Ale – Pours a hazy amber brown (copper?) color with a minimum of light tan head. Smells of bready malts with a dark fruity kick (perhaps from that aging and booze). Taste is very sweet, featuring lots of rich malt flavors of caramel (maybe a little vanilla) along with a pronounced fruitiness and some booze. Mouthfeel is rich and smooth, creamy, but with plenty of tight bubbled carbonation. This feels very much like a scotch ale, though it’s also similar to the recently reviewed Otter Creek Anniversary strong ale… I didn’t realize it, but apparently this was aged on new oak of some kind (details are a little sparse), which I think may have tempered some of the flavors, which could easily have been unruly or overpowering, but really weren’t. Overall, it’s pretty darn good. B+

As usual, Founders delivers. And of course I’d love to try Curmudgeon’s Better Half, one of those impossible to find Founders Backstage series beers that was aged in Bourbon Barrels that were also used to age maple syrup (yum). Alas, I missed out on the release earlier this year… here’s to hoping that they get around to making some more next year…