Weyerbacher brews a special batch every year to celebrate their anniversary, usually picking an uncommon style for the honor. For instance, last year’s installment was a Dark Braggot (a sorta mead/beer hybrid). This year, we’ve got… a saison. Doesn’t sound strange? Well, considering that the saison is the least coherent style in the history of beer, that actually does leave Weyerbacher some room to make something wacky.

And wacky it is: brewed with pink peppercorns, orange zest, lemon zest, and grapefruit zest, this beer weighs in at a “style-obliterating 10.5% abv”1. This last bit is done in accordance with the classic “Weyerbacher anniversary requirement” of a strength around 10% ABV or so, but I sometimes get the feeling that Weyerbacher overdoes it with the alcohol in their beers. I often find myself wondering if some of their beers would be better if it was just a little lower in alcohol, a little more dry. Then I have another Double Simcoe and forget everything I just said. But I digress, this anniversary beer probably could have used a little less alcohol: 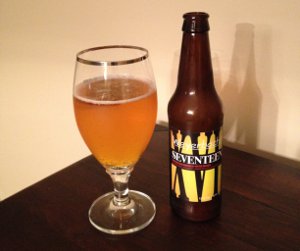 Weyerbacher Seventeen – Pours a very pretty, clear golden color with a minimum of quickly disappearing head. Smells strongly of spicy Belgian saison yeast, clove with some light earthiness, maybe even a little booze. The taste is full of that spiciness, which helps cut through the sweetness and the booze, which are quite prevalent. Mouthfeel is full bodied, reasonably well carbonated, but it gives way to a sticky mouthfeel in the finish. The booze is definitely a big part of this brew, maybe too much, but it’s still a worthwhile effort. I’m enjoying it, but I wish it were a few percent ABV less. B

I can’t really blame Weyerbacher for this, it’s apparent that they like their beer boozy, and it’s not like I didn’t enjoy this stuff (in fact, I’ll probably pick up another bottle and see what age does to it). They’re still one of the more interesting brewers in the area though, and I always look forward to trying something new from them.

1 – In my post on the lack of coherence of saisons, I gave a range of 3-10% ABV, based on the highest ABV saison I’d had or seen, Fantôme De Noel. Weyerbacher didn’t smash the record or anything, but that’ll learn me to think I could ever describe a saison in any sort of consistent manner. I bet, somewhere, someone is making a 2% saison, chipping away at the other end of the range. I should just say that a saison is anywhere from 0-60% ABV, but then some crazy European will probably make a 65% ABV saison. Ok, I’ll stop now.