The summer saison is upon us, so I decided to revisit a beer that disappointed me many moons ago. I’ve mentioned before about how Ommegang Hennepin was my Craft Beer revelation, but being a fledgling beer nerd at the time, I had no idea what I was really doing. All I knew about the beer was that it was a saison style beer, so when I went to the beer distributor looking for saisons and saw this local offering, I bought me a case of the stuff (grumble, grumble, the PA case law is evil, grumble) and was a little crestfallen when it turned out that the beer wasn’t as good as Hennepin. It was a fine beer, much better than the macro swill I was used to at the time, and I had no problem finishing the case (I had roommates at the time who helped with that task), but it was still a little disappointing. As it turns out, the saison has the least coherent style definition in the history of beer, so my strategy of trying other saisons was doomed to failure anyway. But all this was a long time ago (almost a decade? Yikes…), so I figured it was time to revisit the stuff: 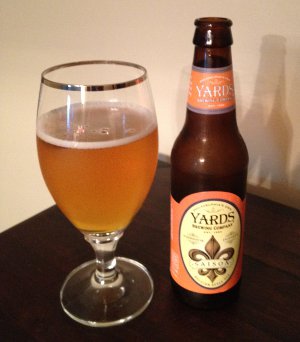 Yards Saison – Pours a slightly hazy yellow gold color with a finger of whitish head. Smells a little like a Belgian Wit – this is clearly a spiced beer, though some of that may be the result of yeast. Lots of spice on the nose, clove, orange peel, maybe some peppery notes, and just a hint of light fruitiness. The taste is lightly sweet with some spice character evolving throughout the taste and aftertaste. The mouthfeel is relatively light, well carbonated, a little spicy harshness, and some dryness that strangely gives way to a less dry finish (not bad, but it is different). Overall, this is certainly a nice, flavorful, non-funky take on the saison, but it’s not really best in class either. I certainly enjoyed it, but my earlier impression of the beer (which was not bad, to be sure) hasn’t changed very much. Solid beer, but not really lighting the world on fire. While not quite a session beer, it is hitting the spot after a warm day though… B

As summer approaches, I’m sure more saisons will be reviewed… indeed, there’s one in the pipeline right now that will lend even more credence to the aforementioned notion that the saison style has the most incoherent definition in all of beer.