Let’s see here: Take a Belgian style Dubbel, add smoked malt (inspired by German Rauchbiers), and then age it in American Oak formerly used to age Bourbon. Also, and this is key, don’t tell anyone that you’re doing it. Seriously, if it weren’t for the eternal vigilance of my local beermongers, I probably wouldn’t have known this even existed (heck, even they had it tucked away in the back, rather than out on display).

To be sure, I’ve had the regular Otto before, and I have to admit that I found it underwhelming. Belgian style Dubbels are one of my favorite styles, but the smoked malt in Otto overwhelmed any of that great Belgian character, making it a sorta-one-dimensional smokey affair. Of course, that tasting was at a beer club, so conditions weren’t entirely ideal, but my opinion doesn’t seem to be all that unusual. Even the guy at Pinocchio’s agreed with me on that count. I did buy a bottle of the stuff to lay down in my cellar for a while, hoping for the smoked flavors to mellow a bit and maybe harmonize with the Belgian characteristics.

Well, I’ve still got that bottle in my cellar, but when I found out that Otto in Oak existed, I knew I had to get my hands on some of the stuff. It’s not exactly a secret that I love me some barrel aged beers, and I think this treatment could give Otto some much needed balance (not something normally associated with bourbon barrel aging, but still): 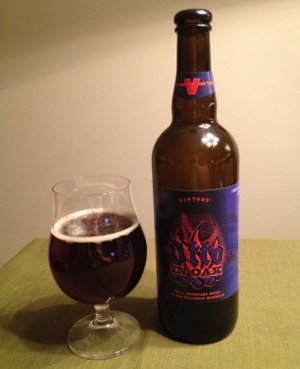 Victory Otto In Oak – Pours a very dark chestnut brown color with beautiful amber highlights, clear when held up to light, with just a bit of light tan colored head. Lots of bourbon in the nose, but also a bit of smoke and maybe even a hint of that musty, spicy Belgian yeast. The rich malt backbone and bourbon hit first in the taste, followed by a light, mellow smokiness, then some of that Belgian dubbel character as the bourbon reasserts itself in the finish. I really like how the bourbon has mellowed out the smokiness here. Indeed, I can even pick out the dubbel-like flavors, something I had trouble with in the regular Otto. As it warms, the flavors evolve and coalesce even more, and some additional flavors come out to play. There’s an almost nuttiness (definitely the wrong word for it, but along those lines) that I was getting towards the end of the bottle. Mouthfeel is well carbonated with a rich, full body. It’s a much better balanced beer than the regular Otto, though it is quite an odd combination. Overall, a complex, unique beer with a mountain of flavor. A-

From the release dates of Otto (October 15, 2011) and the bottling date on the Otto in Oak, I gather that this has been basking in the glow of Bourbon barrels for around 6 months. I don’t know that it’s quite as successful as Victory’s Dark Intrigue (Bourbon barrel aged Storm King stout), but I do find that I really enjoyed this beer, and I’m really glad I thought to buy an extra one to keep around… And I’m actually heading over to the brewery tomorrow night to meet some friends, so maybe they’ll have some of this stuff sitting around.

2 thoughts on “Victory Otto In Oak”