Wonky barrel-aged blogging continues, and today’s nerdery centers around the concept of bourbon barrel aging. It seems that every brewery has a barrel-aged program of sorts, and the most commonly used barrels appear to be bourbon barrels. Why is that?

If you’ve ever done any reading about the history of brewing*, you’ll notice that many of the distinctive characteristics of beer are not solely the result of genius brewers. Indeed, it seems like the history of every style of beer comes attached with a million caveats about how brewers had to account for new government regulations, laws, and taxes. And bourbon barrels are no exception.

As it turns out, the legal definition of bourbon states that it must be aged “in charred new oak containers” (amongst other requirements). The operative word there is “new”. This means that bourbon producers can only use their expensive barrels once before having to discard them. As such, a secondary market for used bourbon barrels is thriving due to their wide availability and flavor contributions.

While it has been well established that using new oak barrels is a best practice, I found it odd that such a thing would be codified in law, so I dug deeper and it turns out that this is all an artifact of prohibition and the great depression. As the U.S. was emerging from the long national nightmare of prohibition, the government did its best to ruin things through excessive regulation (stupid three-tiered system!). Enter Wilbur Mills**, a representative of the great state of Arkansas, who lent his support to the bill defining bourbon, but only if he could add a requirement for new oak barrels as a benefit for Arkansas’ lumber industry. It was a win win. Arkansas lumber magnates were delighted at the increase in business (don’t forget that this is all happening during the depression), and the Kentucky Bourbon barons also loved the law because it legally protected their preferred spirit.

In essence, they did the right thing for the wrong reasons, and us beer dorks are still reaping the benefits to this day. Speaking of which: 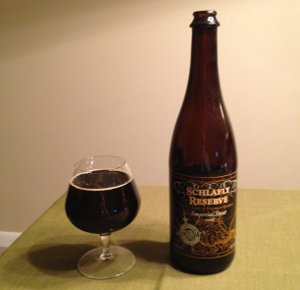 Schlafly Reserve Imperial Stout 2008 – Pours a very dark brown color with very nice amber highlights (not as dark as I was expecting) and no real head to speak of… Smell is filled with bourbon, caramel, chocolate, oak and vanilla, maybe a tiny bit of dark fruit too. Taste is very sweet, tons of that rich caramel flavor, dark malts, and a nice, boozy bourbon punch in the middle. There’s very little stout-like roastiness here, though some of it does peek out in the finish. Very complex stuff, and it continues to evolve as it warms up, with the various flavor components jockying for position… without ever seeming to overwhelm the palate. Mouthfeel is nearly perfect. Well balanced carbonation, very smooth, full bodied, rich, and chewy. It’s not something you gulp down or anything, but it’s well balanced and goes down dangerously easy. Overall, this is a wonderful beer. I suspect there are some who would want more typical stoutlike flavors of roast and coffee, but those are not my sweet spots – this beer hits my palate very well. A

Between this beer and their oak aged barleywine, I’d say Schlafly has made quite a nice impression. I’d love to try a newer vintage of their barleywine, and they seem to have quite a selection of good beer available. But tomorrow, we’re going to look at yet another bourbon barrel aged white whale beer. Stay tuned. Same bat time, same bat place.

* Or, I suppose, alcohol in general, as you’re about to find out when it comes to bourbon. And I suppose it’s not limited to alcohol either – ever wonder why the US government defines a tomato as a vegetable (and not a fruit)?

** Incidentally, Mills is apparently more famous for a whiskey-soaked and scandalous liaison with a stripper named Fanne Foxe, aka “The Argentine Firecracker”. Heh.