Call me Mark. Some years ago – never mind how long precisely – having little or no money in my purse, and nothing particular to interest me at my local bar, I thought I would sail about a little and see the beer-soaked part of the world. So begins Moby Dick (uh, I may have paraphrased a bit). You see, us beer dorks have our own white whales. The rare, the fabled, the mythical beers we seem to constantly hear about on the internets, but which are mysteriously absent from all but the luckiest of bottle shops. I’ve actually had a pretty great run of whales this year, and my latest victory is the vaunted Kentucky Breakfast Stout (KBS for shorts, it currently resides at #10 on Beer Advocate’s top beers list).

As with a few other whales, it’s something I just assumed I’d never get my hands on… Not just because it’s rare, but because I was actually a bit disappointed by Founders’ standard Breakfast Stout. This isn’t really surprising, as I’m not much of a coffee guy and that particular beer is dominated by roasted coffee flavors (Perhaps espresso? I’m pretty clueless about the flavor distinctions of the coffee world…) It’s not that I hate coffee or anything, I just don’t like when it overpowers a beer. But a Kentucky Bourbon Barrel Aged Breakfast Stout? Now you’re speaking my language. I’m still expecting coffee, but also a heaping helping of bourbon, vanilla, and chocolate, a flavor combination I’m more in tune with.

Plus, as it turns out, the base beer of KBS isn’t actually the regular Breakfast Stout. According to an email from Founders (big ups to Scott of Beerbecue for doing the legwork here, and sharing it): “KBS is its own entity. It is like Breakfast Stout’s big brother. Kinda like an Imperial BS.” So apparently they brew a special imperial stout specifically made to age well in the bourbon barrels they sourced. In the words of Melville: “Such a portentous and mysterious monster roused all my curiosity.” 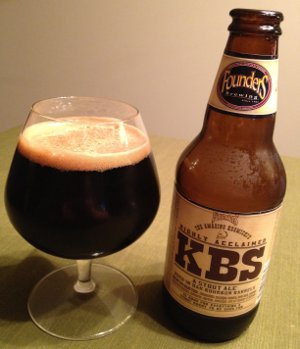 Founders Kentucky Breakfast Stout – Pours a very dark, very thick, oily brown color with a surprising finger of light brown head (I’ve heard this has very little, but I got plenty!) Smells strongly of roast coffee and malt, along with something a little sweeter that I can’t quite place (perhaps that bourbon peeking through). At this point, I was a little worried that this would be another coffee bomb, but fortunately, that didn’t happen, and as it warmed, the nose opened up a little, evincing more balance. The taste actually ends up being quite distinct from the nose, though that coffee and roast malt character is certainly there. I’m getting a lot of caramel and chocolate out of the taste, especially at the start and the middle, and a very light bourbon kick also comes out to play, tempering the coffee and roast character, which doesn’t show up until the finish and aftertaste. At first this seemed a bit unbalanced, but as it warmed, the flavors coalesced into something deserving of all the hype this beer gets. The mouthfeel is superb. Perfectly carbonated, full bodied and a bit chewy, this nonetheless doesn’t feel like an 11.2% ABV beer – the alcohol is well hidden, except for a bit of that alcohol warming effect when you drink too quickly (which you will, because this stuff is excellent). Overall, it’s a wonderful, unique, and complex beer, quite deserving of the hype. And like everything Founders makes, it’s masterfully crafted stuff. Is it my favorite beer evar? Not really, but I can see what the fuss is about here. A-

The bottle also sez: Does not give relief from: rheumatism, neuralgia, sciatica, lame back, lumbago, contracted muscles, toothache, sprains, swellings, and all manner of distress. Is good for everything a stout ought to be good for.

I’m quite glad I managed to stumble on two bottles of the stuff during a routine stop at a local beer joint. Knowing that the beer was just making its way to our area, I asked the beer monger if he had any. Limit of two per customer, and you’ve got to buy a case of Founders too. I’m not entirely sure if that’s legal, but hell, it’s Founders beer. It’s not like it’s gonna go to waste!

Someday I hope to get my hands on Founders’ even more rare Canadian Breakfast Stout. As I mentioned yesterday, there’s a big secondary market for used Bourbon Barrels, and apparently some folks (let’s call them Canadians) use these barrels to age Maple Syrup (actually, where can I get some of that goodness?). Founders then takes these bourbon/syrup barrels and ages their standard Breakfast Stout (brewed with extra coffee and chocolate) in them. Sounds like amazing stuff. Alas, I think I missed my chance for these suckersthis year, as they were amongst the most sought after beers in the country (seriously, the mania surrounding CBS looked even more insane than the craziness surrounding Pliny the Younger). Perhaps I’ll get some next year, or the year after, once the hype has subsided minutely enough for me to find a bottle (yeah, I might be waiting longer than that…)

Finally, I almost forgot, I have the last bottle from the 4 pack of Breakfast Stout that I bought last year. It’s been in my fridge for that whole time, but we’re heading into the summer months now, so perhaps I’ll wait til fall to crack that open. Perhaps the age will mellow that excessive coffee, and I’ll love it…