Firestone Walker has one of my favorite logos, mostly because it features a standing bear holding up its paws like an old-timey boxer. This is across from a more typical rearing lion figure that nevertheless seems like it’s relying on wimpy slaps (though, granted, it looks like it has some pretty vicious claws) in the implied fight to the death depicted on most labels.

Oh, and I guess the brewery is somewhat known for their beer too. While it’s far from my first of their beers, this is the first time I’ve actually reviewed one… a situation that will reverse itself in a few weeks, I suspect, as a few others are in the pipeline. There are many interesting things about the brewery, especially their philosophy on barrel fermentation, but since this particular beer is fermented on stainless steel like most other beers, I’ll save the barrel discussion for later: 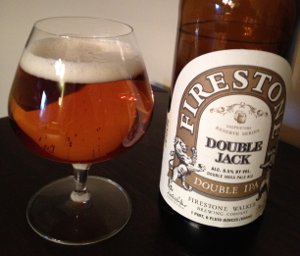 Firestone Walker Double Jack – Pours a gorgeous clear golden color with a finger of white, fluffy head. Smells strongly of bright citrus with some resiny pine aromas peeking through as well. As it warms, maybe some more floral notes come out to play. Taste also has a nice citrus and pine character to it, with a robust bitterness emerging in the middle and intensifying through the finish. Mouthfeel is smooth, medium bodied, and goes down pretty easy. Overall, fantastic double IPA. I feel like I should have more to say about a beer that is this good, but the only thing that comes to mind is that… I want more! A-

I’ve had some of their standard Union Jack IPA before, and I really enjoyed that. I actually mentioned Walker’s Reserve Porter in my Oscars post, though I never got around to doing a full review. I wasn’t a huge fan, but it’s a solid take on a style I don’t usually love. Coming up, we’ve got Firestone Walker XV, their blended anniversary monster beer that everyone’s been raving about (as will I, when I get to the review, probably next week!) and Sucaba, another barrel aged barley wine that I’m very much looking forward to… Basically, they’re a brewery to look out for…