Dogfish Head is always producing interesting, if perhaps a bit gimmicky, beers. Unfortunately, interesting doesn’t always translate to “tastes good”. Yeah, yeah, you developed the recipe from some three thousand year old tomb, but it doesn’t taste very good (I’m looking at you, Midas Touch!) And lately, it seems like everything has to have the weirdest ingredients ever. But when it comes to more normal styles, Dogfish Head can really nail it. In particular, they’re great at IPAs. Their Minute series of beers is exceptional. I’m sure many would call the whole continually hopped nature of the series something of a gimmick, but compared to some of the other stuff they do, I think it’s a valid approach.

The 60 Minute IPA is an excellent take on a standard style (though I may have overrated it a bit), the 90 Minute is an exceptional beer (and the best thing Dogfish Head makes), and the 120 Minute is a monster. Then there are the variations. Squall is bottle conditioned 90 Minute IPA, and it’s really nice (alas, this beer was discontinued… in favor of the beer I’m reviewing today). Burton Baton is wood aged 90 Minute IPA, also a fantastic beer. And now we come to the 75 Minute IPA, a blend of the 60 and 90 Minute beers, with additional dry hopping and bottle conditioned with maple syrup. Also, I think this is their first beer bottled in their fancy new embossed bottles… 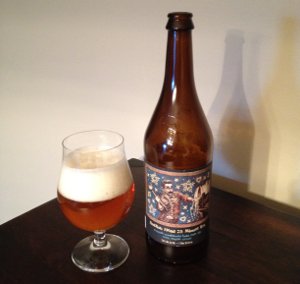 Dogfish Head 75 Minute IPA – Pours a bright but slightly cloudy golden color with tons of billowy white head. Smells strongly of sugary sweet citrus, with plenty of pine and hints of something else too. Perhaps a bready yeast character? And as it warms, it takes on a more earthy character. Taste has a nice, sweet profile that eventually gives way to a nice dry bitterness in the finish. You get a little of that citrus and pine flavor too, and again, something I’m having trouble placing. Perhaps it’s the yeast or the maple syrup… and again, as it warms, an earthiness emerges. Mouthfeel is strongly carbonated, but still surprisingly light to medium bodied. I haven’t had a 90 Minute IPA in quite a while, but this feels a lot lighter. Overall, a damn good IPA and a solid addition to the minute series (though I think I still prefer the 90 Minute). B+

While Dogfish Head can be hit-or-miss with me, I’m always at least interested in trying their stuff. I don’t really have anything in the pipeline right now, though I do have a couple bottles of 120 Minute aging in the cellar right now, along with the monster World Wide Stout (both of which are beers I really love).