Well, no, but that’s what they named their beer. Years ago, in a failed attempt to make a barleywine, Lagunitas attempted to save the batch by throwing in a bunch of brown sugar. The result… wasn’t a barleywine, but it was apparently pretty great in its own right. It was called Brown Sugga, and it became their regular winter seasonal beer. Unfortunately, it apparently takes a long time to brew and it ties up brewery resources, so this year, when resources were at a premium and their brewery upgrade wasn’t ready yet, Lagunitas decided to cancel the popular brew this year (they’re installing extra capacity right now, so there should be no problems next year.) 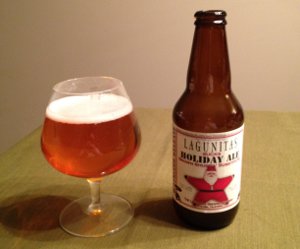 Lagunitas Sucks Holiday Ale – Pours a nice clear golden orange color with about half a finger of quickly disappearing head. Tons of lacing though. Smell is sugary sweet, with lots of citrus (grapefruit), a little pine, and some sort of earthy floral aromas as well. Taste is very sweet, with that floral pine taste hitting immediately, followed by a well balanced bitterness in the middle and finish. Mouthfeel is light to medium, really easy to drink. Maybe a hint of booze is detectable, but the dry finish does a good job hiding it. Overall, a wonderful beer. A-

I’m not an expert on Lagunitas, but they sure seem to know what they’re doing with these hoppy beers (i.e. they don’t suck!) As much as I enjoyed this one, I’m kinda looking forward to Brown Sugga next year…