After some post-holiday procrastination, I finally settled down to make myself a small batch of a Simcoe single-hopped IPA. Hops are one of the 4 key ingredients in beer, and there exists an amazing variety of hops. Most of the bitterness in beer comes from hops, but they also provide flavor and aroma characteristics. Some hop varieties are good for bittering, but not for flavor or aroma. Some are great for flavor or aroma, but not really for bittering. And then there are the utility players – hops that do everything. Simcoe is one such hop. Simcoe is actually a relatively new variety of hop, often referred to as Cascade on steroids (Cascade hops were the most revolutionary of American hops – most notably featured in Sierra Nevada’s classic Pale Ale). They’re a high alpha acid hop (around 12-13%), which makes them great for bittering, but they also impart a huge, distinctive citrus and pine flavor/aroma.

I patterned my recipe on Weyerbacher’s Double Simcoe IPA, though I have no idea how accurate the recipe I used matches that beer (I do know that my recipe wouldn’t be as strong as 9% ABV though). The guy at the homebrew shop mentioned that my grains, at least, were similar to Bell’s Two Hearted (which is another fantastic IPA), but that beer uses Centennial hops instead of Simcoe. Anywho, this is what I settled on (note: this is a small, 2.5 gallon batch, so there’s much less malt than you might expect):

Nothing too fancy here (although damn, Simcoe hops are expensive!) I suppose the Turbinado sugar isn’t a typical ingredient, but simple sugars like that help dry out the beer (which would otherwise have been pretty heavy). Steeped the specialty grains in 2-2.5 gallons of 150° F – 160° F water for around 20 minutes, drained, sparged with another half gallon of water, threw in the can of Light LME, and put the lid on to bring the wort to a boil. During the wait, I scooped out a small sample of wort and made myself a Hot Scotchie. It’s a strange beast, this hot scotchie. I’ve heard many homebrewers talk about it, but details on exactly how to make one are a bit scarce. Near as I can tell, you take a sample of unhopped wort before it reaches boiling, then add a shot of Scotch to it. Jeff Alworth has a decent description:

Brewers would draw off a small amount of the mash as it issued from the grain bed, fresh and warm. To this they added a dollop of Scotch. What happens is nothing short of mystical. Mash runnings are very sweet and flabby–there’s no definition to the flavors. The addition of Scotch somehow reverses all this. Like an electric current, the Scotch animates the grains so that you can taste them in HD. The Scotch is likewise a very clear note, but not sharp or aggressive. It has all the flavor of a straight shot, but it’s floating amid Mom’s comforting malted. Insanely beguiling.

So I took a sample of wort, and threw a shot of Ardmore (it’s a cheap Scotch, but it’s got a nice, distinctive peat smoke character to it that’s not overpowering) in there. 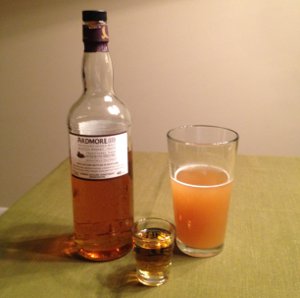 It was an interesting experience. My experience with the hot scotchie wasn’t quite as revelatory as it seems to be for everyone else though. It was good, to be sure, but I’m not sure it’s something I’d always do. Also, because this is a small batch, I probably shouldn’t have taken that much malt out of the wort – I ended up with a lower OG than I’d like…

Anywho, once the boil begins, I add in 1 ounce of Simcoe hops and start the timer. 30 minutes into the boil, I add the Golden DME and Turbinado sugar. When I do this, the temperature of the pot seems to drop (makes sense because I’m adding room temp ingredients), so I pot the lid back on the pot and bring it back to a boil (I’m not counting these 5 minutes time as part of the boil). Once it’s back boiling, I add a half ounce of hops (the first flavor hop addition). 10 minutes after that, I add another half ounce of Simcoe (second flavor hop addition) and the teaspoon of irish moss. Finally, with 5 minutes left to go, I add the aroma hops (actually sprinkling some throughout the last 5 minutes).

Moved the pot to the ice bath to cool it off, brought it down to about 80° F, strained the wort (removing the hops) into the fermenter, and topped off with about 1/4 to 1/2 gallon of cold water, bringing the final temperature down below 70°.

Original Gravity: 1.068. Definitely lower than I was shooting for (my target was in the 1.070s), but assuming a 75% attenuation, this should work out to around 6.7% ABV, which will be a solid IPA. Add in that citrusy, piney goodness from the Simcoe, and I’ll be a happy camper.

I did notice a lot of sediment in the wort, even after I strained it into the fermenter, which has me a bit worried, but what else can I do? I guess we’ll find out in a few weeks.

I’m going to try something new with this batch – dry hopping! I talked to the guy at the homebrew shop and he said I could do it in primary, so I figure I’ll wait a week or so (i.e. until fermentation ends), chuck in the last ounce of hops, give it another week, then rack to the bottling bucket and bottle the suckers. Exciting!

Not sure what my next batch will be. I’ve been toying with the idea of a Earl Grey beer – start with a british beer base (perhaps an ESB), then use some sort of bergamot oil for extra flavor. I have no idea if it will work, but I want to see how it turns out. It’ll probably be another small batch, so even if it’s bad, it won’t be a big deal. After that, I’ve been thinking about a Belgian dubbel for a while now, and I think it’ll be time…