I know, it’s unfair. This beer is only available at the Victory brewpub (and maybe a few local beer bars). I promise, tomorrow I’ll review a beer that’s more widely available*. Anyways, Victory seems to like smoked beer. They’ve got their roots in German brewing, so perhaps that’s not a surprise, but they do a lot of smoked beers at their brewpub (though mostly not for wide release – one exception to this is Otto, a smoked Belgian Dubbel). But if they wanted to, I think this smoked porter (presumably brewed with oats) would actually work pretty well: 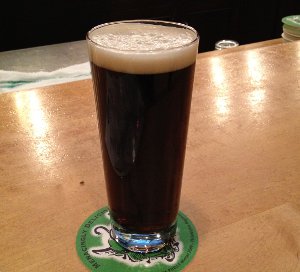 Victory Smokin’ Oats – Pours a very dark brown color with amber highlights and finger of tan head. Smell is smoky with a solid amount of roasted malt character. Those roasted malts take on more prominence in the taste, along with some coffee flavors and a rather well matched smokiness. Mouthfeel is medium bodied with solid carbonation and a nice crisp finish. It actually went really well with the brisket taco things I was eating at the time. A very good beer! B+

* Technically, the next beer on my list is Trappist Westvleteren 8, which is one of the least accessible beers in existence, but I’ll skip it for a day or two, I think.