So I bought this beer last summer. Damned if I remember why I bought it then, but I did. Heck, I’ve never even really heard of the brewery (as it turns out, they’re a very small, semi-local brewery)… But it’s been sitting in my fridge since then, and it actually seemed appropriate for New Years, so here we are.

Why is it a New Years beer? When you hear the phrase “Holiday Ale” you’re probably thinking about something that’s Christmassy. Darkish beer with spices and/or lots of warming alcohol, with maybe the odd imperial red ale making an appearance. But there’s definitely a different connotation for New Years. When it comes to alcohol, people tend to think of Champagne as the spirit of choice for that holiday. Jim from the Beer & Whisky Brothers blog recently laid out his 5 Rules for New Years Beer and while I normally find such proclamations kinda silly, I thought I’d play along anyway. Because I’m a silly guy, after all.

So let’s see here. The beer is corked, so check that off. The label is a bit iffy. It’s well designed and everything, but it’s not like a fancy, classy Champagne label. It is light colored and as it turns out, you can see through it, so we’re back on track. It’s definitely quite effervescent and bubbly, so there’s another criteria met. The name “Two Front Teeth” isn’t quite nasty, but neither is it properly festive, unless you’re hanging out with a bunch of hockey players for new years. So that’s a strong 3 out of 5, with the other two criteria on the borderline. Call it 4 out of 5. Not too shabby: 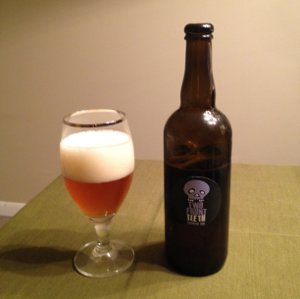 Spring House Two Front Teeth Holiday Ale – Pours a bright, clear golden color with tons of fluffy head. Smells deeply of musty Belgian yeast and typical banana/clove aromas. Taste is candy sweet with a punch of spiciness and a nice dry finish. There are definite hints of fruitiness in the taste, but I’m not getting any cherries out of this. As it warms, that fruitiness becomes more pronounced, but I still couldn’t pick out cherries… It’s light colored, but it feels a bit on the heavy side. Medium to full bodied and a little alcohol warming effect, but still smooth. Not an everyday beer, but it’s working well as a new years beer! From what I’ve heard about this beer, I’d like to try a fresh bottle of this stuff, as it seems like it may have mellowed out in my fridge after such a long stay… B+

Interestingly enough, the past two years worth of New Years beer for me have been strong saison style beers (last year’s being Avec Les Bons Voeux de la Brasserie Dupont, a hard beer to beat and one of my favorite beers period, let alone holiday beers). They do strangely seem to fit the mold. I’d also assume that a light colored sour beer would work – think Russian River Temptation (I suspect Jim would take issue with the name of the beer and the Scythe imagery on the label, but who cares what he thinks). In fact, that beer is quite champagne-like. Perhaps if I can’t find a new saison for next year…