Somehow, Alesmith makes two different beers that are both named Yule Smith. And one of them comes out in the summer. Now, the word “Yule” is derived from a Germanic winter festival that was absorbed by Christmas (one of many such occurrences), so the summer one doesn’t really make much sense unless you consider the dubious holiday of Christmas in July an event worth celebrating. Then again, if it’s an excuse to make good beer, who am I to complain?

What we have here, though, is the actual Christmas version of the beer. Apparently both varieties are hoppy, imperial ales, with the summer incarnation being a DIPA and this winter one being an imperial red ale. In my recently formulated hierarchy of holiday beers, this one represents category three – the do whatever the hell you want and call it holiday beer approach. I guess red is a color associated with Christmas, so there’s that. 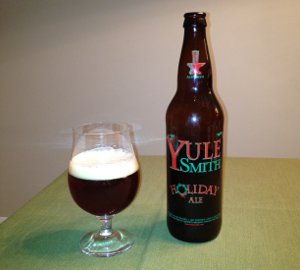 Alesmith Yule Smith (Winter) – Pours a dark reddish brown color with a finger of whitish head. Smells strongly of sweet, fruity hops. Maybe even a little pine. Taste starts very sweet, with some of that hoppy fruit and sticky pine. Then you get a small dose of bitterness. Nothing overpowering, but it’s prominent. A nicely balanced beer. Body is full, and you get that sticky resin feeling too. Overall, I find this quite enjoyable and the strong hoppy character was a welcome change of pace. A-

As it turns out, this was my first Alesmith beer. And it’s made a good impression too, so much so that I think my next homebrew might end up being an imperial red. Anyways, I’ll definitely want to pick up some of the summer Yule Smith, and I know folks seems to love the Speedway Stout as well.