I’ve been drinking and reviewing lots of holiday beer recently, so I thought I’d take a step back and think about what makes a holiday beer a holiday beer. There are, of course, no easy rules for holiday beers, but there are a few approaches that seem to work really well.

Approach the first: spice the hell out of it. This is usually done to a style that focuses on malts. The spices and malts lend a warming sensation (hence the “Winter Warmer” style). Approach the second: make it stronger. This seems to be a Belgian thing. Oh, it’s Christmas? Let’s make our dubbel, but give it 3% more alcohol. That’ll be fun. Of course, Belgian beers are often spiced and those distinctive Belgian yeasts also contribute some spicy character to beer, so there is that too. What you end up with is a spicy, malty, boozy treat, and with all the alcohol, you can really get that warming sensation going.

Then there’s approach the third: do whatever the hell you want! This is typified by Sierra Nevada’s Celebration, in which they just decided to do a strong, hoppy, reddish IPA thing and slapped a holiday label on the bottle. Nothing particularly festive about it, but it somehow manages to work anyway (we’re going to see at least one more of these before the year ends).

I tend to prefer approach 2 (see: Ommegang Adoration, Affligem Noel, St. Bernardus Christmas, etc…), but approach 1 has its charms as well (see: Anchor’s Christmas Ales and my own take on the style). The third category has some wonderful beers, but I also don’t find much holiday charm in there either.

Anywho, browsing the international section of State Line Liquors, I spotted this bottle from Ølfabrikken and bought it on a whim (insert nerdy joke about the null set here). As it turns out, this is a beer of the first approach, and one of the finer examples of that style: 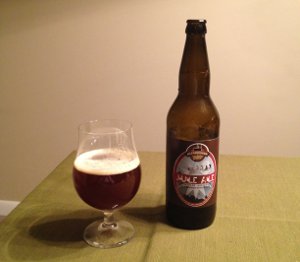 Ølfabrikken Jule Ale – Pours a dark reddish brown color with a finger or so of quickly disappearing off-white head. The aroma is great. Rich malts, bready yeast, some spiciness, and even some piney hops. The taste isn’t quite as complex as the nose, but there’s still a lot to enjoy here. Sweet malt backbone, some of that spiciness, and a fair amount of hop character. Not a ton of bitterness, but the fruity, piney hop character flavors are certainly there. Mouthfeel is a little strong to start, but it mellows out as it warms. Overall, a very well executed beer, and a nice change of pace from the throngs of normal winter warmers. B+

So I had never heard of Ølfabrikken before, but now that I’ve had this, I’m interested in sampling more of the Denmark brewer’s offerings. Indeed, Dave seemed to really enjoy their porter, which only makes me want to take another trek down to Maryland to get me some…