Like Anchor’s Christmas Ale, these are apparently vintage dated and feature new artwork on the label each year. Unlike Anchor, the recipe appears to be the same each year. While I haven’t sampled a lot of Samuel Smith’s catalog, what I’ve had so far has been uniformly solid stuff. No face melters, but really well executed examples of classic styles like oatmeal stouts and brown ales. As such, I was quite looking forward to this beer. Alas, my hopes were dashed. 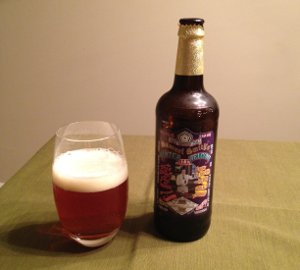 Samuel Smith’s Winter Welcome Ale – Pours a clear amber color, lighter than I’d expect, but with a nice couple fingers of head. The smell reminds me more of an English Pale Ale – light malts and grassy hops. The taste is also like an English Pale Ale. Light malts in the beginning with some buttery notes (typically not a good thing, but they’re light here) and earthy hops coming out in the finish. Not a bitter bomb, but it’s there. There’s a slight spiciness to it, but it wouldn’t surprise me if they got all that character out of yeast and hops. Mouthfeel is definitely a bit too light. It works well enough to start, but as I got towards the end, the carbonation was too low. It wasn’t a bad beer, but it’s not particularly in my wheelhouse either and it’s not something I see myself revisiting anytime soon. C

A disappointing effort from Samuel Smith, but I’m still a fan of their stuff and will most certainly be trying something else from them in the near future. Well, if I keep buying beer the way I have been lately, it probably won’t be the near future. Seriously, I’ve got a lot of stuff in my cellar these days. Good stuff. Stuff I should really drink soon. Not to mention 4 cases of homebrew. But I digress. Beer club tomorrow! See you then.