Every year, the craft beer pioneers at Anchor Brewing put out a special Christmas ale as the holiday approaches. It’s apparently quite the beer dork tradition, and while I’ve only started drinking these last year, I was excited for this year’s installment. The recipes change with each iteration (as do the labels), so it’s only natural that folks save a few from previous years and compare them. Since the recipes are different, it’s not technically a “vertical” tasting, but I thought it would be a fun exercise and besides, I had totally forgotten about the 2010 bottle that was sitting in the back of my fridge. So on one cold evening, I threw on a couple of Holiday horror movies (both of which were rather unremarkable) and popped my two Anchor Christmas vintages (both of which were rather good) for a comparative tasting, starting with the 2010. 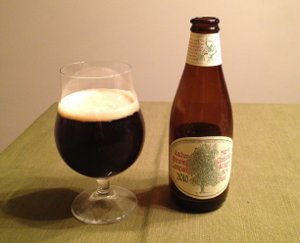 2010 Anchor Christmas – Pours a very dark brown, just a hint of ruby red when held up to the light. About a finger of tan head. Aroma is quite nice. Very sweet smelling, maybe brown sugar and vanilla in there with a faint hint of dark fruit (raisins?). Taste has some spiciness to it, and that brown sugar character is there too, but there’s an overarching flavor I can’t quite place and a strange bitterness that settles in the finish. There’s an aftertaste that isn’t particularly pleasing. Mouthfeel is still quite nice, even after a year, though perhaps a bit on the light side. Here’s the strange thing – I like this beer and I think it might even be better than it was last year, but I’m rating it lower than I did last year. I definitely overrated this last year, but I’m really glad I retained this bottle. B 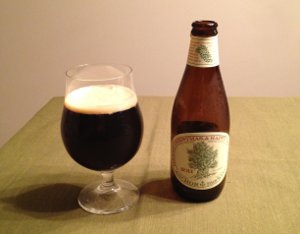 2011 Anchor Christmas – Also pours a very dark brown, though not quite as dark as the 2010 variety, and more reddish colors show through when held up to light. Aroma is very spicy – cinnamon is clearly apparent. It smells sweet, but with none of that brown sugar or dark fruitiness from 2010. The taste seems much spicier (again with the Christmas spices of cinnamon and nutmeg, etc…) with a complex arrangement of malts. On the other hand, the bitterness here is much more subdued and better matched to the beer, leading a nicer finish and less of an aftertaste. The mouthfeel is again nice, though again a bit lighter than expected. As the beer warms, it seems to get more complex and ever more drinkable. Overall, I think it’s a small improvement over last year, and quite a good beer. B+

I actually really like some aspects of the 2010 beer (a fantastic aroma coming off that thing), but I do believe the 2011 to be a more balanced brew. This was fun – I’ll probably save a few of the 2011 bottles and do the same thing next year. I’ve also been cracking a few of my homebrewed winter warmers lately, and I’m happy to report that they compare favorable to the Anchor beers (which were the basic inspiration for my recipe).