Yet another annual Christmas ale that is vintage dated with a different recipe every year. In this case, brewer Mikkel Borg Bjergsø is a bit of a perfectionist. It’s not a completely new recipe every year, but he does make small tweaks with each iteration. Details on the changes are sparse, but they generally seem to involve the spicing. Previous incarnations featured spices like cocoa, cinnamon, and coriander, but the 2010 version I had recently was apparently made with bitter and sweet orange peels and nutmeg. This sounds like it would be a big difference, but this is a huge, 10.9% ABV Belgian Strong Dark, so there’s a big backbone to overcome. Like a lot of great Belgian beers, you can taste the complexity of the spicing, but you can’t quite pick out what specific spices were used…

I bought this beer a while ago (early summer, perhaps?) and have been saving it for the holidays. So its time has come: 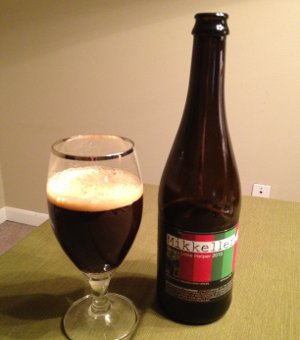 Mikkeller Santa’s Little Helper 2010 – Pours a very dark brown color with a finger or so of light brown head. The aroma is very complex and quite nice. I’m picking up lots of vanilla, a little belgian yeast character and spiciness, maybe even some chocolate or roastiness. It smells like it will be full of rich flavors, and that is certainly born out in the taste. Sweet and spicy, with just a hint of that distinctive Belgian strong dark feel and spiciness. The twist here is the chocolate and roast flavors, which I typically don’t love in my Belgian darks, but it’s very well matched here. Just a hint of clean bitterness in the finish and aftertaste. Mouthfeel is full bodied but silky smooth. For such a strong beer, the booze is pretty well hidden. As it warms, it seems less Belgian and more Imperial Stout. Overall, a fantastic, well balanced but complex beer and a candidate for best Holiday beer of the year (though there are still some heavyweights to come)… A-

Well, I liked it enough that I picked up the 2011 version that same weekend, though I haven’t drank that one yet. I doubt it will make it to next year though!